The earliest north pier, 700 feet long, had been built over a period of ten years, completed in 1796. The first lighthouse appeared in 1803 on this pier, replacing the old wooden structure containing a reflector lighter. 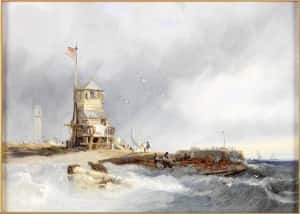 The new octagonal stone lighthouse was 23.7m high and was fitted with nine gas burners that gave off a light that was visible for up to 12 miles out to sea. The lighthouse inspired Sir Cuthbert Sharp to write a poem in 1828 whilst he was living in Sunderland,where he worked as one of the River Wear Commissioners. You can read the full poem here.

John Murray extended and largely rebuilt the pier and lighthouse in 1841, only for Thomas Meik to replace the lighthouse with a new cast iron version in 1856. This remained in position until 1893 when it was moved to its current position in Cliffe Park. 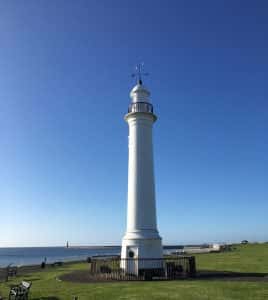 Sir Curthbert Sharp’s evocative poem of the perils of this area of coast vividly describes the sea as seen from the clifftops at Roker.  You can read the full poem here. 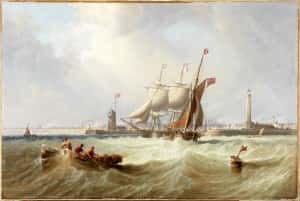 Henry Hay Wake had succeeded Thomas Meik as engineer for the River Wear Commissioners in 1868. He continued Meik’s work in remodeling the north docks by building long breakwaters, beginning in 1883. Of the planned two piers, only one was completed. This is the North Pier, which is over 900m in length and reaches out in the North Sea in a quadrant curve.

The pier was built of rubble and cement foundation faced with blocks of concrete and red Aberdeen granite, giving an overall impression of red and white.  The red bands are rock-faced, producing a variation in texture as well as colour. 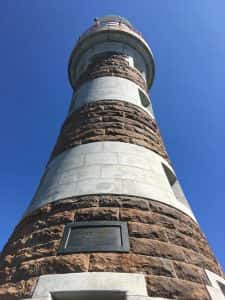 The lighthouse at the pier head was started in September 1885 and finally opened 23 September 1903. When it was opened, this lighthouse contained the most powerful port light in Britain. The south pier was only partly constructed, but this was abandoned in 1907. (See also the page relating to the South Docks.) 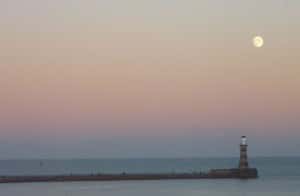 Roker Pier and the light house were part of a massive restoration project that was completed in  2018.  The project was been hampered by the storms that batter this part of the coast, reminding us of the challenge that Meik and his team had to contend with during the original building.  You can find out more about this exciting project from the associated web site: Roker Pier restoration project

The area continues to inspire creative writers to this day.  This piece of ‘flash fiction’ by Sylvia Forrest is one of the entries in the Sunderland Literature and Creative Writing Festival, 2016.

Roker Park was opened in 1880, on land donated by Church Commissioners and Sir Hedworth Williamson, the 8th Baronet, and a local MP until 1874. 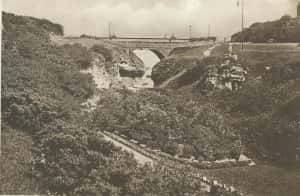 Spottee was a foreign sailor who was stranded in Sunderland, and lived in the cave. His name came from the spotted shirt he wore and he was regarded as a lunatic by locals, partly because he did not speak English. He subsisted by scavenging along the coast, begging, and doing manual work. According to the legend, he disappeared into the cave never to be seen again, and was regarded by children as a ‘boggle’ (a bogey man or ghost).

The hole led to a mysterious underground passage. Nobody knows where it leads to, although there is speculation it ends under St Peter’s Church. In Alice in Sunderland, Bryan Talbot speculates that this mysterious underground tunnel might have inspired Lewis Carroll’s Alice in Wonderland, which he originally titled ‘Alice’s Adventures Underground’. Carroll regularly walked along this coast whilst staying in Whitburn.

Spottee’s story is commemorated in an eighteenth-century song in Mackem dialect, attributed to Thomas Clerke and recorded in Sir Cuthbert Sharp’s The Bishoprick Garland, or a Collection of Legends, Songs, Ballads &c. belonging to the County of Durham (1834).  You can read the full poem here.  If you are interested in the dialect in which Spottee’s Cave is written, you can read Dr Michael Pearce’s discussion of it here.

Sunderland is one of only three English cities to have its own beach.  The sea front at Roker was developed into a popular tourist destination during the 19th century.   Sunderland-based architect, Frank Caws, stepped in to save the beach in the late 19th century when plans to develop this as a quarry were gaining credence. He developed a scheme for this area that in 1901 emerged as the seafront promenade that we still have today. 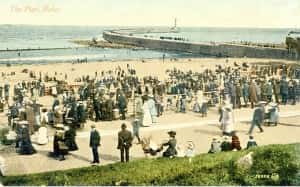 The beach at Roker became a popular tourist destination for trips from Newcastle and Tynemouth by steamboat.  A song written in the 1860s by Joe Wilson records the hazards of such a trip on a choppy sea.  You can read the lyrics here.  The day-trippers in this song would have used Monkwearmouth Station as there was no railway across the river at this time, using the old iron bridge to cross into town and visit the newly-opened Mowbray Park before taking tea in High Street.

Lewis Carroll frequently walked along the beach between Whitburn and Sunderland, whilst staying with his cousins, the Wilcoxes, who lived in Whitburn. Bryan Talbot’s Alice in Sunderland illustrates this scene, along with the summary:

“Here on the beach in 1855, a year before he meets Alice, Carroll sketches Frederika Liddell who’s staying at nearby Whitburn Hall, home of Hedworth Williamson. He tells stories to her, her sister Gertrude and Alice’s other Liddell cousins, that are most likely later woven into the tapestry of Wonderland.” 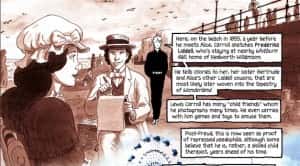 The Williamson and Liddell families were linked by marriage; Hedworth married his cousin, Elizabeth Jane Hay Liddell, in 1863. Through the Wilcoxes, Carroll became friends with the Liddell family. Back in Oxford, where he worked, Carroll would go for outings with the Liddell girls and on one of these he told the tale that would become Alice in Wonderland. When visiting the Wilcoxes in Whitburn in 1855, Carrol completed Jabberwocky as part of a family parlour game of verse-making.

On one of his walks along the beach towards Sunderland, Carroll is thought to have met a local carpenter, whom he incorporated in Alice Through the Looking Glass accompanied by the Walrus. Tweedledum and Tweedledee recite a poem called ‘The Walrus and the Carpenter’ to Alice, which tells how the two characters walk down a beach under the moonlight and come across a group of oysters. They invite the oysters to join them on their walk only to eat them later on. Alice engages with Tweedledum and Tweedledee in discussion of the poem. Bryan Tablot summarises Carroll’s creation and development of this in Alice in Sunderland:

“Reworking Alice’s Adventures Under Ground for publication, Carroll expands it, changing scenes, and adding extra characters and bits from earlier stories until it’s literally doubled in length, completing it here in the North East during the Christmas vacation of 1863 […] On one of his customary walks from his Whitburn cousins’ house to Sunderland, Carroll is said to meet a carpenter.  They sit and talk, giving rise to the reputation of this place as the Walrus and Carpenter Beach, drawn here by John Tenniel.” 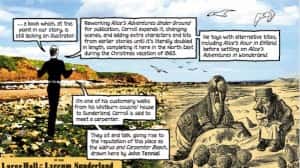 This church was designed by Edward Schroeder Prior in 1906, using £6,000 donated by John Priestman, the local shipbuilder who also funded the building of the eponymous university building in the city centre. Prior was part of the Arts and Crafts Movement and he drew on the services of many of the artists from this for St Andrew’s. The altarpiece screen is a tapestry designed by Edward Bryne-Jones, made by Morris and Co. 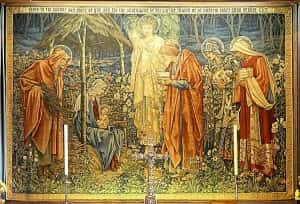 Ernest Gimson designed and made many other fixtures and fittings in the church, and the foundation stone was carved by Eric Gill. The font stands on carved wooden piers and has a wooden cover, carved by Robert (Mouseman) Thompson of Kilburn. Prior’s design for the dome over the chancel was painted by Macdonald Gill, and Henry Payne designed the two main windows which depict biblical figures in contemporary dress. 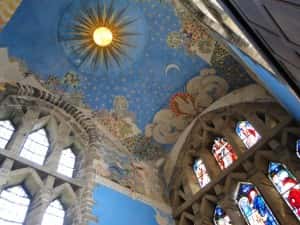 Today, the church is regarded as one of the finest examples of such buildings in the Arts and Crafts style in England. 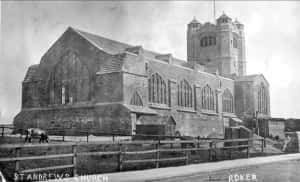 This photo shows the exterior of St Andrew’s around the time it was first consecrated.  Courtesy of Sunderland Antiquarian Society.

Originally built in the 16th century, Whitburn Hall was purchased by the Rev. Leonard Pilkington, rector of Whitburn Church, in 1672.  It passed through his family until it was bought by Sir Hedworth Williamson (5th Baronet), who passed it down in his family for 200 years before it passed to the 8th Baronet of that name in 1872. 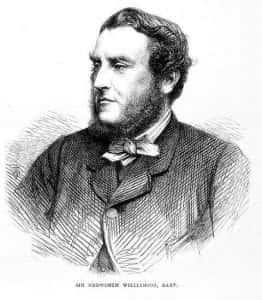 It was this Sir Hedworth who married Elizabeth Jane Liddell. The family often had visitors from London, including the Prince of Wales and the Duke of Edinburgh. It is also reputed that lawn tennis was invented at Whitburn Hall when, in 1876, a group of guests desired a game of tennis but, no indoor court being available, they resorted to playing on the lawn.  If true, this site is now part of Whitburn Cricket Ground.  The hall was also the first in the region to be lit by gas in 1864.  The declining fortunes of the Williamson family led to them abandoning the hall gradually after the Second World War.  It was badly damaged by fire in 1978 and finally demolished in 1980.  Carroll’s visits to Whitburn are commemorated in a bronze statue of him that now stands in Whitburn Library.

Front Street, Whitburn, in 1893. The street is much as it would have been when Carroll visited.  Image courtesy of Sunderland Antiquarian Society.