In 1831, Sunderland was the first town in Britain to suffer a cholera epidemic, with over 200 reported deaths. One of the causes was the unsanitary and congested housing for the poor in the East End of the town. Along with other projects to improve conditions, the government donated £750 towards buying land from the Mowbray family to provide the people of Sunderland with a park in which to exercise and get fresh air. This land was an old limestone quarry, known as Building Hill.

Work on the original park began in 1854. The Sunderland Lord Mayor and MP John Candlish opened the park in 1857. Candlish (1816-1874) has started as editor of the Sunderland Beacon newspaper before making his fortune after starting a glass bottle factory in Sunderland. He is commemorated with a statue by Charles Bacon in the park. 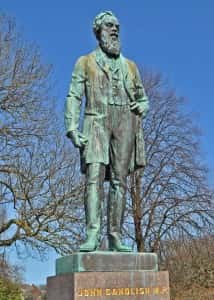 In July 1866, Extension Park was added and connected by a bridge over the railway cutting. By the early twentieth century, the whole area was known as Mowbray Park.

At the top of Building Hill stands a bronze statue of General Sir Henry Havelock, by Behnes. This was erected in the park in 1861 and commemorates his colonial military career. The inscription around the plinth reads ‘Born 5 April 1774 at Ford Hall, Bishopwearmouth. Died 24 November 1857 at Dil Kooha, Lucknow’. Another statue of Havelock is in Trafalgar Square, London. Havelock also gave him name to a form of headgear used in the British army, where a piece of cloth hangs from the back of a helmet to protect the wear’s neck from sunburn. This is credited as being Havelock’s own solution to the climate experienced whilst service in India.

This image of Havelock’s statue in Trafalgar Square, London, shows how central to British military history he was considered in the nineteenth century.  Rather more anonymously in the twenty-first century, he is here just visible above the awnings set up in the Square for London’s annual Gay Pride weekend. 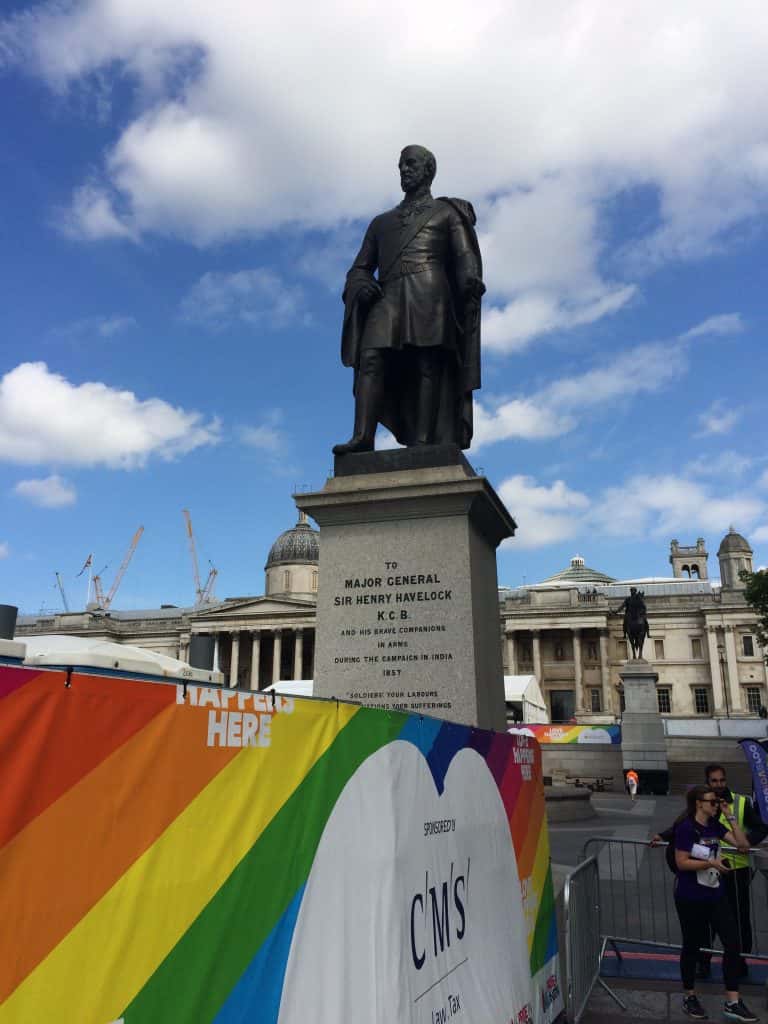 Havelock’s birthplace, Ford Hall, was demolished in 1927, but bricks from that building were used to build the entrance gate to Barley Mow Park, Hendon. The description of him as the “Hero of the Indian Mutiny” reflects changes in attitudes towards British colonialism, as we now refer to this event as the Indian Rebellion, which is the first war of Indian Independence against colonial oppression.

Beside Havelock’s statue on Building Hill are two cannon which are replicas of Russian cannon captured during the Crimean War. The originals, named Caleb and Joshua, were melted down during the Second World War. 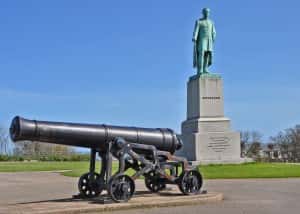 The replacement cannon were designed and manufactured by Smith & Co of South Shields and reinstated on Building Hill in 1999 as part of the refurbishment of the park.  At the bottom of the hill can be found a doorway based on that retrieved from the former rectory at Sunderland Minster. Karl Fisher was commissioned to design and produce the reproduction of this door during the park’s refurbishment in the late 1990s. 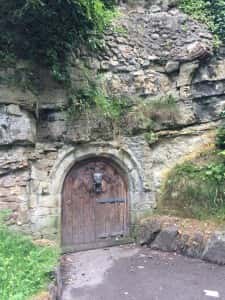 The ornate cast iron drinking foundation was erected in 1878 in memory of William Hall by the Manchester Unit of Oddfellows. Oddfellows was an organisation that spread throughout the UK from the 18th century and sought to help those ‘worthy’ members of the community who had fallen on hard times at a point when there was no welfare state. These charitable organisations provided services and benefits to those in need. William Hall is commemorated because he was the oldest oddfellow in the North of England when he died at the age of 75 in 1876. Constructed by Glenfield and Kennedy of Kilmarnock, the domed canopy of the fountain is supported by four arched columns. Above each column is a motto: ‘Keep the pavement dry’ to the north, ‘Nil Desperandum auspice deo 1878’ (the motto on Sunderland’s coat of arms) to the south, to the east ‘Amicitia amor et veritas’ (the motto of Oddfellows) and ‘In memory of Wm. Hall of the Sunderland District Independent Order of Oddfellows’, and ‘Presented to the Corporation of Sunderland by the Oddfellows NU’ to the west. The fountain was restored during the refurbishment of the park, and unveiled in 2000. 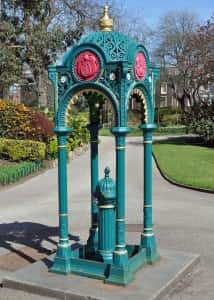 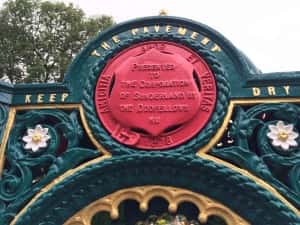 The 2000 refurbishment of Mowbray Park added contemporary voices to those already commemorated in elsewhere in the park. The Mowbray Park poetry project saw community groups contributing work that celebrates their memories of the park. Poet Linda France worked with letter cutter Alec Peever and blacksmith Craig Knowles to incorporate these lines into the 80 new benches in the park, and the two rose gazebos feature lines taken from France’s poem, The Arc in the Park.

If love was a lion,

If love was a rose,

We’d watch how it grows,

Learn all the secrets it knows. 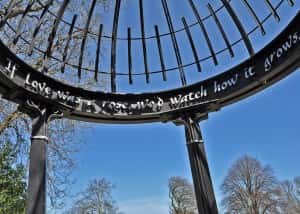 The North Terrace in front of the Museum and Winter Garden and the South Terrace overlooking the lawns feature refurbished stone balustrades embellished with carved stone lions by Alec Peever. 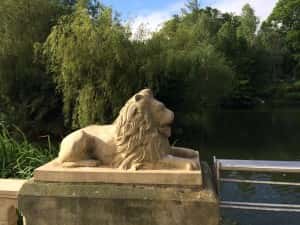 At the east side of the North Terrace is a gleaming bronze sculpture representing ship propellers. This sculpture was presented to the city by the people of its ‘twin town’, Saint Nazaire, in December 2003. 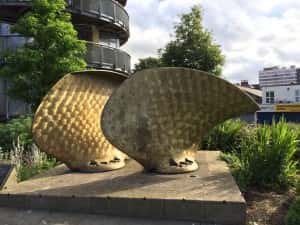 By the lake, there is a sculpture of The Walrus (1999) by Andrew Burton, commemorating Lewis Carroll’s link with Sunderland. 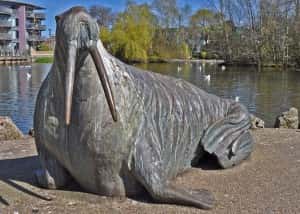 Likewise, there is also a giant chessboard in the children’s playground, in honour of Alice Through the Looking-Glass. 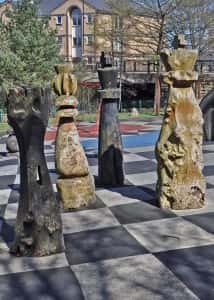 The playground stands at the corner of the park that leads onto Toward Road. Just beside the gate is a memento of Victorian ingenuity: the post box. The version here is a late Victorian box of cyllindrical design that became familiar throughout the country once it was settled on around that time (design VR type B). This box stood at the old Royal Infirmary site on Durham Road from 1887 until the end of the 20th century when it was replaced and this original version donated to the city council. Although not in use, this is a reminder of the ubiquity and longevity of this feature of the British high street. 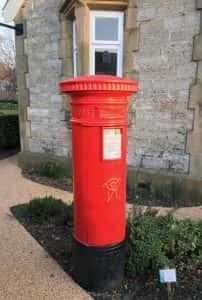 At the opposite end of the park, outside the entrance to the Winter Garden coffee shop on the terrace overlooking the pond, is a sundial embedded in the pavement. On sunny days, anyone who stands on the dateline inscribed in the main slate slab will have their shadow cast on the ‘time’ dictated by the numbers arranged in a semi-circle around this slab. The sundial was donated by the Friends of Sunderland Museums in 2001. 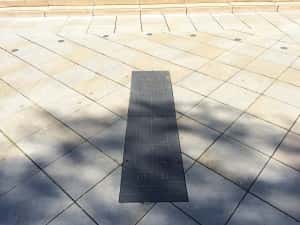 The gates at the Museum entrance were added in 1998 when the park had undergone a major refurbishment after years of neglect. Designed by Sunderland-born artist Wendy Ramshaw, OBE, the design features a geometric pattern that echoes images of Sunderland’s history. 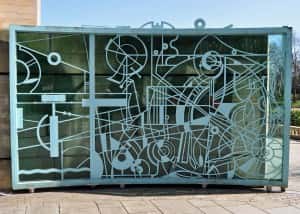 Just to the side of the Museum stands Sunderland’s main war memorial. This features a winged figure of Victory on a column of polished Tuscan marble. Designed by Richard Ray, the figure holds a laurel in her right hand and a torch in her left. It was unveiled in 1922. 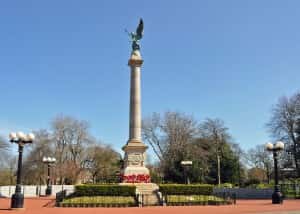 At the base of this statue runs the more recent addition, the Brothers in Arms Memorial Wall. The 20 granite plinths that form this wall record the names of the service personnel from Sunderland who have been killed on active service since 1946. This memorial was the result of a campaign by the families of several service personnel who had been killed in the early part of the 21st century. They raised £120,000 and the wall was unveiled at the annual Armistice ceremony on 11th November, 2011. Behind this structure, in the park itself, is the large Victoria bandstand. This has been refurbished and is the site of regular concerts in the summer. 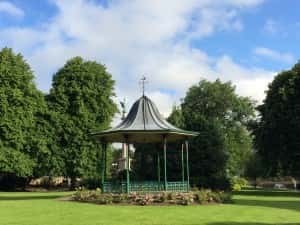