Keel Square is the area of the city that is being developed as a cultural hub. This public space was designed by the City Council’s in-house team to reflect the city’s maritime and industrial heritage, the name being decided by public vote. 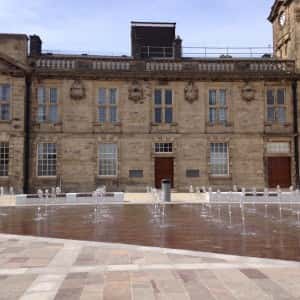 The main feature of the square is the Keel Line, which is a strip of paving set out the mark the length of the Naess Crusader, which was the largest ship ever launched on the River Wear. Engraved in the paving is a list of over 8,100 ships launched on the river with illustrations by Sunderland-based graphic novelist Bryan Talbot. The Keel Line starts with an interactive sculpture, Propellers of the City, by Stephen Broadbent which contains names and photographs of some of those who worked in the shipyards on the Wear. As the square stretches towards the river, there are fountains outside the old court house and seating themed around shipbuilding but featuring details of Sunderland’s twin and sister cites of Saint-Nazaire, Essen, Harbin and Washington DC. 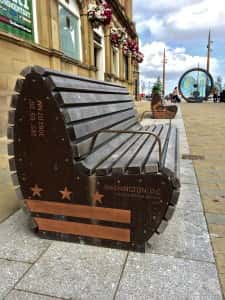 Keel Square is not the first redevelopment of this area of Sunderland.  The impressive Baroque buildings erected in the first decade of the 20th century replaced a much older, haphazard selection of buildings.  This photo (below) of the Londonderry pub around 1880 shows how this was part of a much more heavily built-up area. Just glimpsed to the right of the pub is the decorative archway entrance to the public bath-house at the top of High Street West. Although this building was demolished as part of the early 20th century redevelopment, the archway remains in situ on the 21st century building on this site. 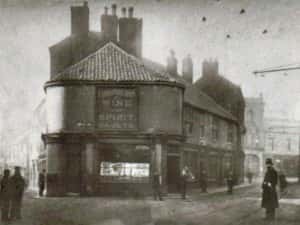 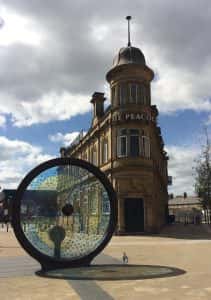 The Peackock (formerly The Londonderry Arms)

Designed by HTD Hedley and built 1901-02, this pub stands on a junction between what were three main roads around Sunderland.  There has been a public house on this site for centuries when this busy junction meant that it was home to the village’s principal inn.  The oldest recorded name for this is Peacock Inn, and on the Rain’s Eye Plan it is marked as ‘Mr Wilson’s Premises’.  When this site was redeveloped in the early 20th century, this once-ideal location proved to be an awkward site, leading to the usual design of the building as it follows the ancient layout of the junction of the three roads. It was designed to reflect the style of the court house, police station and fire station and so was designed in a subdued Baroque style. However, because of the unusual shape of the building, Hedley designed each of the three facades of the building to be different. This is most noticeable in the setting of the doors, but also the roof line. The triangular shape is softened by the rounded turrets at the north and west corners which frame the façade that faces the courts and fire station.

The pub was take over by the MAC Trust in 2016 and re-opened in May 2017 as The Peacock.  This change of name reflects the older name for the pub. 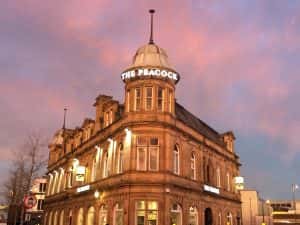 This building forms part of a grander scheme for the rejuvenation of this area of the town in the late 19th century. Designed by William and Thomas Milburn with London architects Wills and Anderson in 1902, the Baroque style is echoed in other institutional buildings around this part of the city. 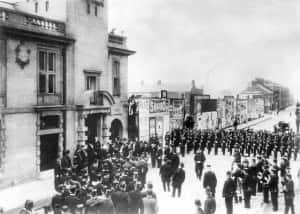 The opening of the Police Station in 1908. Image courtesy of Sunderland Antiquarian Society.

The modern, redbrick building to the left of these early 20th century sandstone buildings features the Baroque doorway and clock of the old High Street public bath-house. 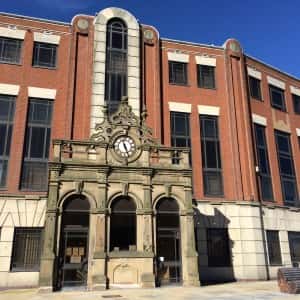 This bath-house stood at the end of High Street West until it was demolished to make way for the early 20th century remodelling of this part of the town. 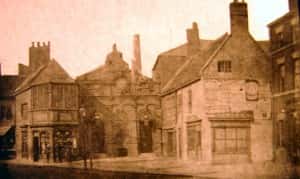 The old magistrates’ court building has recently been taken over as the offices of Hays Travel.

Another building designed by William and Thomas Milburn, opened in 1906. This is a more quirky building, with its embossed flaming torches on the exterior wall between the windows. The fire station closed in 1992. A series of poetic narratives of the recent history of Sunderland filled the upper windows until autumn 2016. The fire station has recently been transformed into a music and arts centre as part of the City of Culture 2021 project. 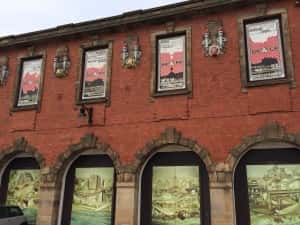 The poetic panels have recently been removed as the site is redeveloped, but you can read the full poem here.

A mural in the centre of the lower doors was created on 10th July 2016 as part of the city’s commemoration of the centenary of the first day of the Battle of the Somme. Asunder centred around a new film by Esther Johnson using archive footage of the Sunderland area from the time of the First World War. This was set to a live soundtrack by Field Music, Warm Digits and the Royal Northern Sinfonia. The Asunder mural was created by Frank Styles, based on a contemporary photo. 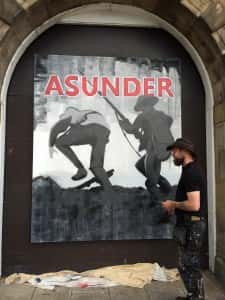 Enjoy a short taste of the performance of Asunder here: Asunder

The regeneration of this area motivated creative writers in the 2016 Sunderland Literature and Creative Writing Festival. This piece of ‘flash fiction’ by Ian Todd was inspired by the work planned for the old fire station site.

The first phase of the rejuvinated Fire Station site was opened in a spectacular ceremony in November 2017. 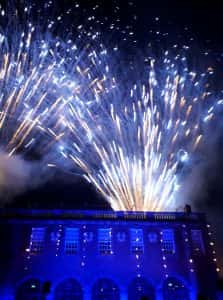 There has been a pub of this name in this area of Sunderland since the early nineteenth century, with one first listed in the Bishopwearmouth Directory in 1834 when it was registered as being run by landlord Chapman Braithwaite. This older pub gave its name to the street that still encircles the new pub and fire station. The current pub was built in the same classical style as other buildings in this area, designed by Benjamin F. Simpson and built by Thomas Pierce Shafto in 1902 for £2,000. 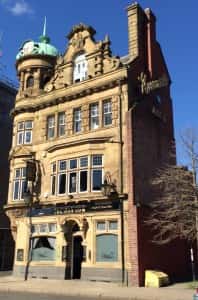 The initials RB on the top gables refer to Robert Duechar, whose brewery ran this pub when it was first built. Its design echoes the domed corner feature of the adjacent Empire Theatre. The pub was extensively renovated by the MAC Trust in 2014, at a cost of £300,000. It is regarded as having one of the finest Edwardian pub interiors in Britain and is listed as such on the National Inventory of Historic Pub Interiors. 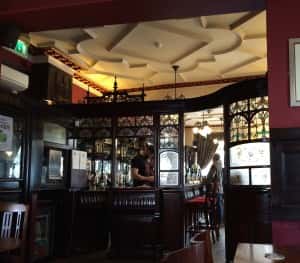 The pub’s name has an interesting local historical connection. ‘Dun’ is old English for ‘brown’. The Dun Cow itself relates to the local legend of the quest by tenth century monks to find a suitable resting place for the body of St Cuthbert. According to twelfth century chronicler Symeon of Durham, they stopped at Warden Law, which is a small hamlet to the north-east of Houghton-le-Spring, and found they were unable to move the bier further. One of the party, Adhun, the Bishop of Chester-le-Street, ordered a three-day period of fasting and praying. According to Symeon, the monk Eadmer then has a vision of St Cuthbert who tells him to take the coffin to ‘Dun Holm’. None of the party knew where such a place was, but Aldhum found that the bier could now be moved. He overhead a passing milkmaid asking another young woman if she had seen her lost dun cow, to which the young woman informed her she had seen such a beast heading in the direction of ‘Dun Holm’. Adhulm decided that this was a sign from Cuthbert, and so followed the milkmaid to what Symeon describes as ‘wooded hill-island formed by a tight gorge-like meander of the River Wear’. This is where they laid Cuthbert’s coffin to rest and so, according to legend, the city of Durham was founded.   The Dun Cow legend is recorded in a stone panel on the north facade of Durham Cathedral. This was added in the 18th century. 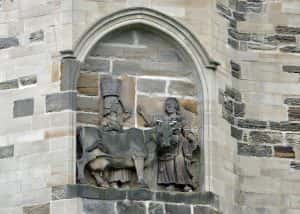 The Empire Theatre is one of the biggest theatres in the North East, accommodating as many as 2,000 people. It stands on what was once the grounds of the St Michael and All Angels rectory, whose gardens stretched down to the riverbank. The rectory was demolished in 1850 when a new rectory was built on Gray Road. Nineteenth century Sunderland had a range of theatres catering for all tastes.

The Empire Theatre was owned by its manager, Richard Thornton, who grew up in South Shields. It was designed by Sunderland’s most prominent architectural firm, William and Thomas Milburn. The foundation stone was laid on 29 September 1906 by the internationally famous male impersonator, Vesta Tilley. She appeared on stage when the theatre was officially opened on 1 July 1907. Today, the pub across the road is named after her. 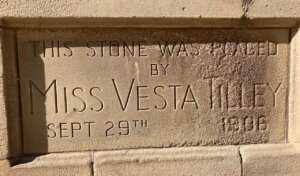 At the top of the theatre’s distinctive tower is a sphere, on which stands a statue of Terpsichore, the Greek Muse of dance and song. This statue was blown off in gales in 2015 and work to reinstate it was completed in November 2016.

Early performers at the Empire included the great nineteenth-century actor Henry Irving, Stan Laurel and Oliver Hardy, Charlie Chaplin, and George Formby. The Beatles performed here on their first national tour. On 26 April 1976, the comic actor Sid James, best known for his roguish roles in the Carry-On films, had a heart attack during a performance here of The Mating Season and died en route to the hospital. His ghost is said to haunt the backstage area.

The theatre continues to be popular, staging a variety of plays, musicals, ballet, opera, bands, stand-up comedy, and pantomimes. 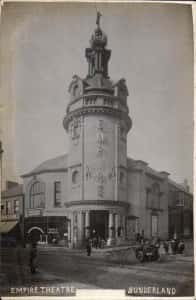 For anyone who walks further to the west from here, you will need to cross the busy St Michael’s Way road. Just outside the Hope Street Exchange building (part of the University of Sunderland) eagle-eyed walkers may spot a castellated sandstone pillar in the shrubbery.  This is the gatepost of Thornton Place, built in 1842, and marks the location of long-since-demolished house that stood on this site and then gave its name to a residential and commercial street that was later levelled to make way for the St Michael’s road network to improve the city’s infrastructure. 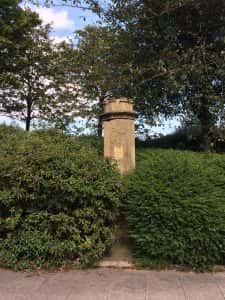