High Street West was the other half of the 19th century shopping area of Sunderland. The corner of High Street West and Bridge Street boasts one such remnant of this rebuilding work, with the glistening white stone baroque façade of Walkers’ Buildings now occupied by a coffee shop and hair salons.  One of the latest buildings in this turn-of-the-century redevelopment, the upper gable displays a date of 1926. This later date accounts for the more austere baroque style of this building, as tastes had moved on from the more ornate buildings around it, not least the eccentric upper floor of the old Grimshaw’s building on the opposite corner. 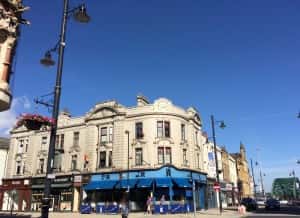 The Walkers’ Building is the last of the ‘new’ buildings to be developed along High Street West at the start of the 20th century.  Very few of the older buildings from a once-bustling shopping street now remain. Many were demolished completely, but fragments of some of the narrow streets that once led off this street to the river do still remain. One such street, Back Bridge Street, reveals the diversity of buildings that once faced onto Bridge Street, with the ones closer to High Street East being of higher quality.   The old gas lighting bracket has been repurposed to hold a modern electric reproduction that sits rather oddly in an otherwise very neglected street. 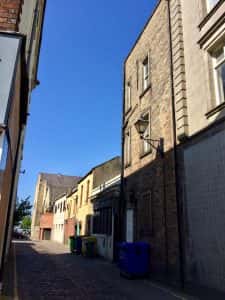 The next lane along is Pan Lane, and this gives a better glimpse back to the faded grandeur of this street. At 94 High Street West a pub, the Three Crowns Hotel, stood from 1793 until it closed in 1981. 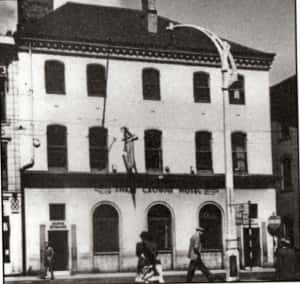 Unusually on this street, the building still remains but is behind a modern front. The side street of Pann Lane does offer us an idea of the older architecture as the ornate tiled side of the pub is virtually intact. 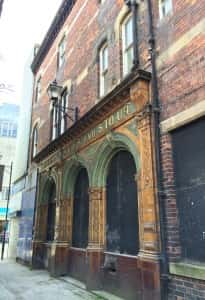 The railway that crosses the river runs under the street between Pan Lane and Back Bridge Street.  This photo from the early 1870s shows this under construction, with the tiled edifice of the Three Crowns visible on the left. The old convent of St Mary’s is the building on the left just beyond this. 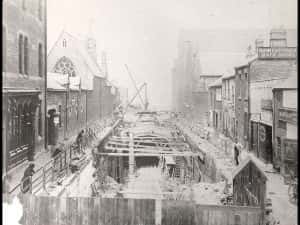 These streets and narrow lanes ran down to the river.  Pan Lane’s name reflects the riverside termination of this street which was the site of the salt panning industry that thrived along this stretch of the riverbank in the 16th century.  Sea water would be boiled in huge pans, 20ft or more across and 6tf deep.  A fire below these pans would boil the pans for about three days until dry to produce salt.  This industry gradually declined and by the time of Rain’s Eye Plan in the late 18th century, the site was occupied by bottle makers, although still retained the names Pan Field and Pan Lane. 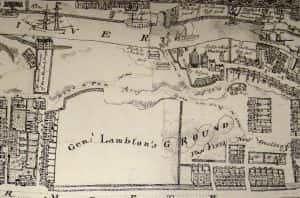 The distinctive arched windows of the Three Crowns can just be seen in the building to the bottom left of this image, with Pan Lane running down the side of it as it does today.  The bridging of the river had yet to take place when this map was drawn, but it would eventually intersect the area marked here as ‘Genl Lambton’s Ground’ with the bottle works in the upper right corner here continuing to operate just under the new bridge.