The Sunderland merchants and businessmen formerly lived close to their factories and workplaces, but by the end of the eighteenth century the old town and the area by the river was becoming overcrowded, noisy, and dirty. With the opening of the Wearmouth Bridge in 1796, there was the opportunity for development outside the old town. In 1810, the Bridge Commissioners paid the Fawcett family £500 to allow them to build a road over their land to connect to the bridge. This became Fawcett Street. The Rain’s Eye Plan shows this area of Bishopwearmouth (1780s) shortly before its development, with the ornate gardens of Sunniside to the east of the land marked as belonging to the Fawcetts. The road running horizontally is marked ‘Bishopwearmouth’ on this section of the map, but would later be named High Street. The land that would later be developed as Mowbray Park can be seen at the bottom of this section, marked as belonging to the Mowbray family. 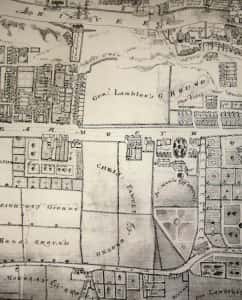 The Fawcett family decided to develop their land to provide housing for the prosperous merchants and businessmen of the town and in 1814 employed William Jameson to plan the Fawcett Estate. In 1815, construction began on the smart terraced houses of Fawcett Street, with the majority completed by 1840. The houses on Fawcett Street were neoclassical in design and the grandest had balconies and stone steps up to their classical doorways. 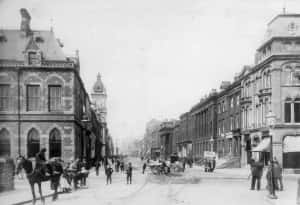 This photo shows Fawcett Street in 1892 from the junction with Borough Road. The distinctive old Gas Office building on the left is now part of Wilko’s department store.  The old town hall tower can be seen a bit further along. On the right, the portico of the Athenaeum can just be seen in the distance, with the last of Jameson’s grand houses still in occupation closer to the junction.

The name ‘Athenaeum’ derives from the school that Emperor Hadrian founded in Rome during the first century AD to promote literary and philosophical studies. Its name refers to Athens, revered by the Romans as the source of science, culture, and thought. During the eighteenth and nineteenth centuries, it was a popular name for clubs and societies devoted to science, arts, and intellectual pursuits. They hosted talks, demonstrations, and debates, with the aim of communicating knowledge old and new to the local community.

The Sunderland Literary and Philosophical Society was founded in 1810 by James Field Stanfield. Stanfield is one of the lesser known heroes of Sunderland, whose work in the abolition of the slave trade is largely unrecognised now.  You can find out more about Stanfield and his remarkable family here.  Sunderland Athenaeum was built between 1839 and 1841 and became the Literary and Philosophical Society’s home. It also became the home of Sunderland Museum, housing a rich and varied collection of artifacts. In the Athenaeum, Lewis Carroll saw the stuffed walrus donated by the sailor, Captain Joseph Wiggins. It is thought that this is the inspiration for the Walrus in Through the Looking Glass and What Alice Found There.

In October 1847, the young Joseph Swan, who was born in Pallion and had become a keen scientist, attended a talk hosted by the Sunderland Literary and Philosophical Society in the lecture theatre at the Athenaeum. W.E. Staite demonstrated an incandescent lamp. Swan was inspired by what he saw and would go on to invent the electric lightbulb, which he demonstrated at the Newcastle Literary and Philosophical Society in 1879. By 1879, the museum collection had grown enormously, and Sunderland Corporation built a new museum for this purpose in Mowbray Park.

The site of the Atheaeum today still bears its name. 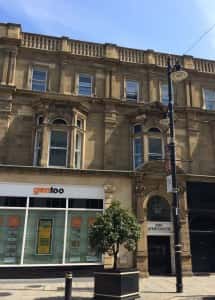 Further down Fawcett Street, Corder House and the adjacent Sydenham House are two of the most striking buildings on the street. They were designed by Frank Caws to have a Moorish style and were constructed between 1889-91 by D. and J. Rankin. Corder House is named after the draper, Alexander Corder, whose shop occupied the building. There are two dates shows in the decorative tiles on the front of this building: 1856 and 1890. The first date relates to the earlier building on this site, which was destroyed by fire in 1889. Caws had his office in Syndenham House. 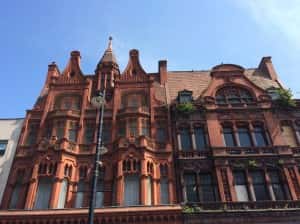 The Sunderland Assembly Hall was built on the site of the old Ebenezer Chapel, on the northern corner of Fawcett Street and St Thomas Street.  It was opened in 1884 and carried out a similar function as a space for public talks as its neighbour, the Athenaeum.  The building was converted into the Assembly Hall at a time when the street was moving from being primarily residential to commercial.  This photograph shows the Chapel just before it was converted, with the main entrance remaining in St Thomas Street, as shown here. 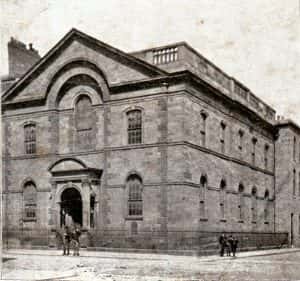 Amongst the speaker who attended were several who spoke up against slavery and racism.  These include Celestine Edwards.  Edwards was a passional anti-racism and anti-imperialism activist, and regularly spoke at the Assembly Hall in the 1880s and 1890s.  He lived in Sunderland for a short time.  You can read more about this fascinating man here.  The Assembly Hall was demolished in the early 20th century as part of the redevelopment of this part of Fawcett Street, and was replaced by a bank, latterly the Midland Bank.  This is currently being redeveloped as apartments, but a blue plaque will be erected on this building to commemorate Edwards. 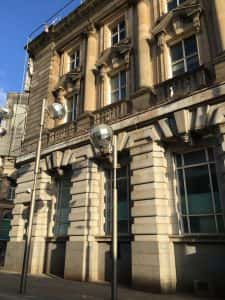 This street takes it name from a church that occupied this site but was demolished to make way for the redevelopment of this area in the late 19th century.  It is the home of the relocated offices of the River Wear Commissioners, who moved here from their previous offices in the Exchange Building. Designed by John Hall from red Scottish granite and local Heworth Burn blue stone, the building was opened in 1907 and contains one of the finest interiors of any building in Sunderland. It was designed to show off the international aspirations of the town, with building materials from around the world being bought. The main door is decorated with a sextant, indicating the original purpose of the building. 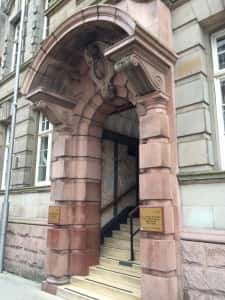 The legacy of the River Wear Commissioners is also now noted on the side of this building with the recent addition of a blue plaque to note the contribution of John Murray (1804-1882). Murray was responsible for much of the development of the river and port in the mid nineteenth century (see also South Dock for more details).

This was designed by Henry Tanner in 1903, and stands on the corner of Sunniside, an area that was formerly the pleasure gardens for the wealthy merchants who lived in the East End (see the map at the top of this page). the old post office building was converted for residential use in the early part of the 21st century. 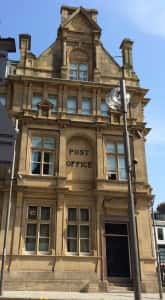 The pleasure gardens themselves were largely at 19th century venture. Prior to that, in the 18th century, the area contained several grand houses with less affluent lodging houses towards the east.  It is in some of these lodging houses that a young German political refugee made his home in the early 1760s.  He had Anglicised his name on arrival, and is best known by this: William Herschel. Herschel was a gifted musician who had deserted the Hanoverian army in 1757. He ended up in Sunderland in 1760 and made a living as a musician and music teacher, whilst at the same time composing several symphonies.  Herschel went on become one of the leading musicians of the late 18th century, but is perhaps now better known for his scientific work in the field of astronomy, which led him to discover the planet Uranus amongst other things.  You can read a bit more about this fascinating man here.

Norfolk Street, which runs along the easternmost side of Sunniside, is the location of the birthplace of Charles W. Alcock (1842-1907).  Alcock was sent to school at Harrow, where he developed a love of sport.  In 1863, he was the prime mover in the establishment of Wanders FC.  He played in the first international match in 1871, between England and Scotland, and in 1875 he captained the national team and even scored in their 2-2 draw. Also in 1871, Alcock  proposed to the Football Association that a national tournament be staged between the clubs in England.  The ‘sudden death’ format of this tournament is taken from the rules he had played by when at Harrow.  The first annual tournament took place in 1872, when 15 teams took part.  It became the first national football tournament in the world and is now known as the FA Cup.  Alcock was also a successful cricketer, playing for Essex County Cricket Club during the same period as he played football.  His enthusiasm for international competition led to him organising what would become the first Test match in England, when they played against Australia at the Kennington Oval in 1881.  The house where he was born, 10 Norfolk Street and there is a blue plaque on the wall to mark this illustrious former occupant. 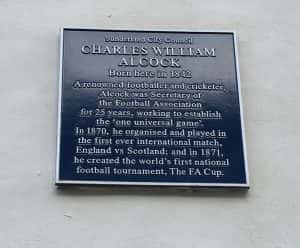 A quick detour further at the end of Norfolk Street and across the road to Foyle Street shows another blue plaque on the wall of what was the Labour Party Offices at the start of the 20th century. This plaque commemorates Sunderland’s first female MP, Dr Marion Phillips.  You can find out more about Marion here. 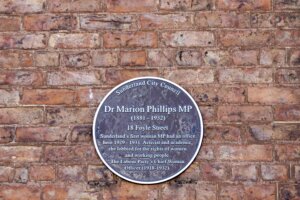 Hutchinson’s Buildings were constructed in 1850-51 and designed by E. A. Middlemass with funding by Ralph Hutchinson. They are more commonly known as Mackie’s Corner after the silk hat manufacturer whose premises occupied a central part of this building. Hutchinson was a wealthy timber merchant who had seen the potential for purpose-built shops to replace the markets that existed further down High Street East. The uneven window heights along the High Street East wing of this building reflect the lack of cohesion in the rebuilding of part of this wing in 1898-99 following a fire. 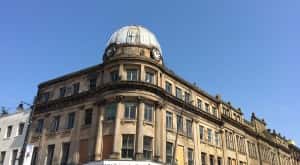 On the corner of Fawcett Street and High Street West, above the old Royal Bank of Scotland premises, is one of Sunderland’s architectural gems: Grimshaw’s Tea Rooms. Designed by the architect Frank Caws, the tea rooms were constructed between 1872 and 1877 for Ronald Grimshaw, a grocer and tea-merchant. The style is exuberant Victorian Hindu-Gothic, with dragons, pagodas and elephants bearing tea-chests bursting out of the building. Caws hoped to extend this oriental style of architecture all along the street. 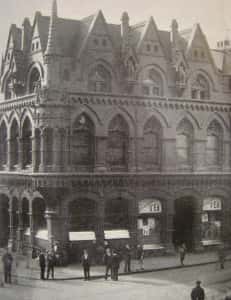 A detail of the building as it is stands in the 21st century.  It has recently been redeveloped as a new location for the local studies centre. 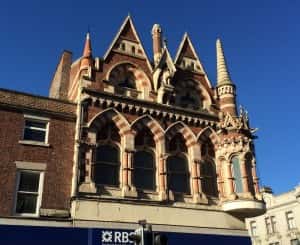 The windows feature a Sunderland-inspired mural designed and painted by local artist, Kathryn Robertson. There are ten elephants hidden in the mural, if you look closely.  As a starter, there is one in the back of the bus at the centre of this window. 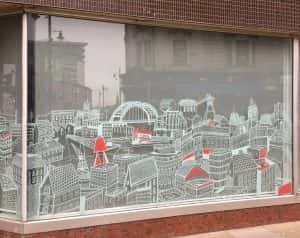