Jack Crawford was born in the East End of Sunderland, and worked as a keelman on the river and then a sailor. In 1796, he was probably press-ganged (recruited by force) into the Royal Navy to fight for the British against revolutionary France and its allies. He served on HMS Venerable under Admiral Duncan. On 11 October 1797, the British navy engaged in a battle with the Dutch navy off the coast of the village of Camperduin. French forces had taken Holland and turned it into the revolutionary Batavian Republic. At the Battle of Camperdown, the British navy overwhelmed the Dutch fleet and secured a significant victory.  The battle is commemorated in a painting by Sunderland-born artist, Clarkson Stanfield (1793-1867) and now hangs in The McManus, Dundee’s Art Gallery (the image is available here: Battle of Camperdown).  During the battle, Admiral Duncan’s colours, or flag, was shot down from the masthead of HMS Venerable. The removal of the colours normally signalled defeat, so Crawford climbed up the mast despite being shot at by the Dutch forces and nailed the colours back to the mast. After the victory, his brave and selfless actions became famous and Crawford was celebrated as a hero.  His humble birthplace in the slums of the East End of Sunderland became a place of local pilgramage, and as this photo shows by the end of the 19th century it was even marked by a plaque attached to the wall of the house declaring this heritage. 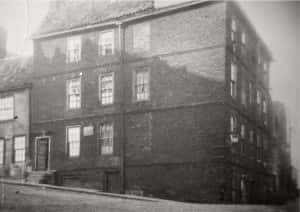 Crawford was presented to King George III and awarded with a government pension. His exploits were celebrated nationally in engravings and pamphlets.  The medal awarded to him by the people of Sunderland is now on display in the museum. 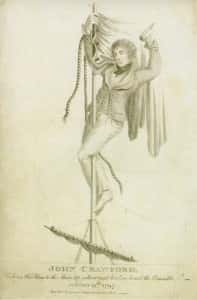 Crawford returned to Sunderland, where he fell on hard times and drunkenness.  He was the second recorded victim of the 1831 cholera epidemic that hit the East End of Sunderland. He was buried in a pauper’s grave but renewed interest in Britain’s naval past in the latter part of the 19th century led to a revival of civic pride in Crawford’s exploits. In 1888, a public appeal funded a memorial headstone in the grounds of Holy Trinity church in the East End. The heightened sense of Victorian Imperialism of that time is clearly seen in the use of coloured marble to indicate the pattern of the Union Jack. 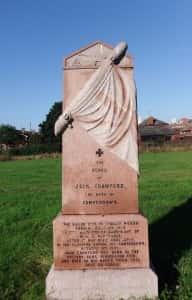 A further public appeal led to the construction of a bronze statue in Mowbray Park. The statue by Percy Wood was put up in 1890 and closely mirrors the image of a youthful Crawford as found in the popular engravings of earlier in the century. The plinth is inscribed: ‘The sailor who so heroically nailed Admiral Duncan’s flag to the main-top-gallant-mast of HMS Venerable in the glorious action off Camperdown on October 11, 1797. Jack Crawford was born at the Pottery Bank, in Sunderland, 1775 and died in his native town in 1831 aged 56 years. Erected by public subscription’. 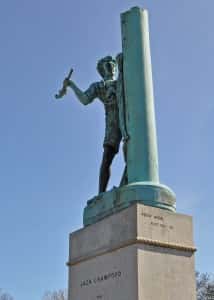 Crawford’s bravery was also commemorated in poems and songs, including one anonymous poem, which was frequently included in anthologies of poetry for young readers. You can read the full poem here. 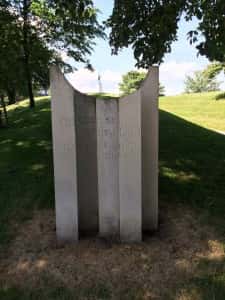 The original statue of Jack Crawford is now supplemented by a modern sculpture by Alec Peever.  It includes the phrase ‘nail your colours to the mast’, which is widely thought to be a direct reference to Crawford’s actions and is perhaps one of the most long-lasting legacies of this event.  This five-part sculpture, when aligned with the Jack Crawford statue on the hill above, reads: On open sea or dry land, nail your colours to the mast.

Most recently, the gable end of one building that stands facing High Street East where it intersects with Church Street East, has been adorned with a mural based on the same heroic image of Crawford. As with most of the murals in this part of Sunderland, it is by Frank Styles. Crawford’s actual residence in Pottery Bank would not have been in this specific location, but further east, where the lanes skirted round the barracks above Thornhill’s Wharf. 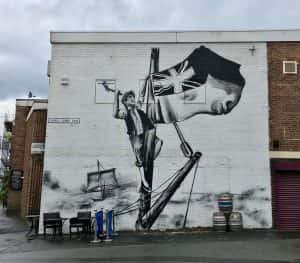