John Murray was the River Wear Commissioners’ chief engineer from 1832 in a period when the river was becoming more industrialised and engineering work was assisting this in the remodelling of several sections on both banks.  The work around the harbour had been privately financed (see also entry for North Dock), and the ambitious Murray proposed radical plans, including converting the distinctive bend in the river into a dock, and the introduction of lock gates across the river mouth to maintain a constant depth of water in the river. When these ideas were rejected, he turned his attention to the south bank of the river with proposals for a dock controlled by lock gates. George Hudson, the ‘Railway King’ and local MP, was enthusiastic about this idea as it served his existing plans to develop that area. He employed Murray as engineer for his Sunderland Dock Company in 1845, although Murray remained consultant engineer for the River Wear Commissioners.

George Stephenson was initially involved in the planning of the new south dock, but after he withdrew in 1846, Murray was solely responsible for the design and construction of docks and a tidal basin that included access to the river and directly to the sea. The dock included the staiths of the Durham and Sunderland Railway, which formed part of Hudson’s railway empire, and was served by the dock railway and drops.

The docks were opened in 1850, amid great celebrations.  Several paintings commemorate this event, such as this one by Mark Thompson. 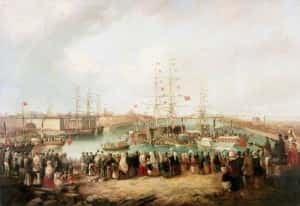 Opening of the South Dock, Sunderland, 1850 by Mark Thompson (1812-1875). Courtesy of Sunderland Museum and Winter Garden

Hudson Dock, as became known, continued to be developed into the 1860s. Murray designed the Sunderland Dock Company offices on this site. Designed in limestone with sandstone dressings, this is in the Baroque style. A clock tower rises at the south-east corner. The whole docks covered an area of 47 acres and was built largely on reclaimed land. By 1856 it had been enlarged to 66 acres and between 1864 and 1868 the Hendon Dock was added after the River Wear Commissioners had bought the Sunderland Dock Company in 1859. All the docks had access to the sea, initially using a unique sluicing system, which was replaced in 1878-8. In 1889 two million tons of coal passed through the dock, and in 1928 five million tons. Two South Dock grain warehouses survived until the 1990s, the larger designed by John Dobson in 1856, the smaller by River Wear Commissioners engineer Thomas Meik in 1863.  Meik’s warehouse can be seen at the forefront in this photograph from 1896. 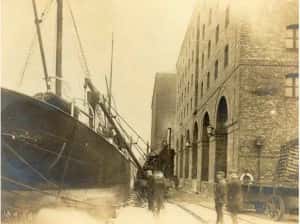 Thomas Meik’s map of Sunderland, from 1851, shows the positioning of the docks on both north and south banks of the river at the harbour entrance. This is much the same layout as is still in use today. 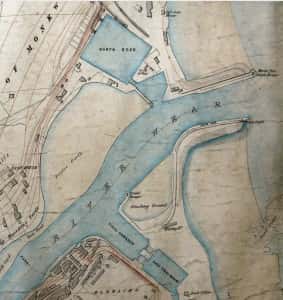 The working docks are not open to the public, but a good view of them is available from the north side of the river at the point where the Watching and Waiting sculpture is located.  Murray’s dock office building is still in use, indicated on Meik’s map to the centre right at the bottom, and seen below in the centre of the picture. 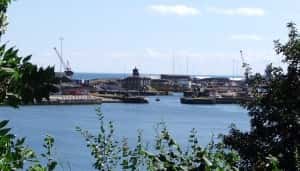 The image below, taken during the 2018 Tall Ships Race celebrations, offers a view of the docks with the arc of the south pier curving to the left. 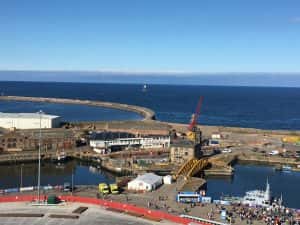