Running up the west side of Mowbray Park is Burdon Road.  This forms part of the old road between Sunderland and Stockton.  Across the road from the park is another vestige of the road’s previous importance, the Fawcett Street Station drinking fountain. This is embedded in a wall opposite the war memorial in Mowbray Park. It marks the former entrance to the station at the Newcastle and Darlington Junction Railway’s terminus, and operated 1853-1879. The station closed in 1879 when the new Central Station was opened (which was destroyed in a bombing raid in 1943). The fountain bears the Sunderland motto: Nil desperandum; auspice Deo which roughly translates as ‘Do not despair: trust in God’. This is also found on the central crests on Wearmouth Bridge. 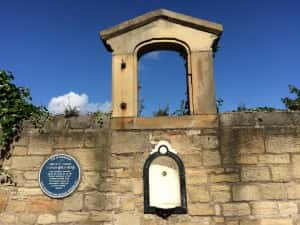 The fountain is mounted on a wall that leads off to the left that would have been the formal entrance to the old station.  All that is left of this now are the gateposts that are just to the side of the fountain. 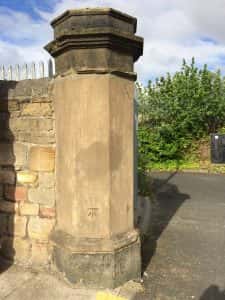 The left gatepost has a small symbol engraved into it just above the lower plinth.  This is an Ordnance Survey benchmark symbol.  These symbols are survey marks made by Ordnance Survey to record height above Ordnance Datum. If the exact height of one benchmark is known, the exact height of the next can be found by measuring the difference in heights, through a process of spirit levelling.

Most commonly, the benchmarks are found on buildings or other semi-permanent features. Although the system has long since been replaced by more accurate GPS measuring systems, these visible symbols can be found on a wide variety of structures around the UK.  Other examples in Sunderland include the stone at the base of the gatepost into Ashburn House, and on the wall of Barclay’s Bank in Fawcett Street.

Many older residents of Sunderland lament the demolition of the old town hall in Fawcett Street in 1971. 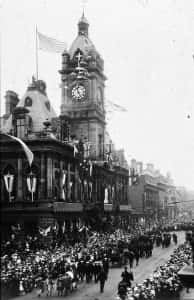 Fawcett Street and the old Town Hall during a parade to celebrate the end of the First World War. Courtesy of Sunderland Antiquarian Society.

By the late 1960s, the council had taken the decision to build new premises as the old buildings were too small and in need of extensive renovation. The architect for the new building was Jack Bonnington, and the site chosen to build the massive new structure was on the edge of Mowbray Park on a hill looking across the town. The main layout of the Gollifer Associates-designed building and the brick pavements are designed around the theme of the hexagonal links of chain used in the shipyards, using brown brindled engineering bricks. Tiled footpaths around the Civic Centre.

This is carried through into the interior of the building. The design also reflects a shift in the notion of public service, away from a traditional building centred around the council chamber and offices, and instead focusing on the public enquiry desk which is centred on the two interlinking hexagons that form courtyards. The high design concept has made the building more hated than loved, particularly by those who work there and have to negotiate miles of corridor to move between offices.

This aerial photo shows the building in the final stages of its construction in 1971, clearly showing the hexagonal design concept. Mowbray Park can be glimpsed on the far right side of the shot, with the railway line curving from the left to its new ‘underground’ station. 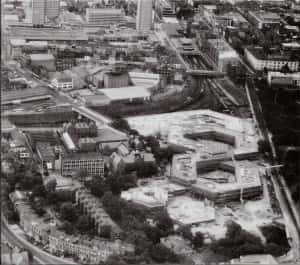 Whilst the aesthetic merits of the building are virtually unanimously derided by the people of Sunderland, they have also some notable fans. For example, Pevsner’s Buildings of England (1983 edition) refers to the ‘artfully-designed steps and ramps’ and the compliments the ease of access to the buildings as well as ‘no off-putting maze of corridors’ that are often a characteristic of such public buildings. This building ceased to be used by the local council in 2021, with the new City Hall building on Keel Square taking over as the main centre for council services. This new building seems to take the opposite approach to architecture, with the Civic Centre’s “design before practicality” being replaced by a somewhat bland box of the building where there is undoubted “practicality before design” at work.

On the other side of the Civic Centre, opposite Park Lane Bus Station, embedded into the pavement is the remnants of an old mile post that marked one mile to Sunderland to the north and 26 miles to Stockton on the south side. 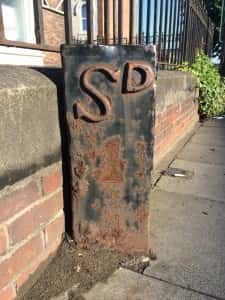 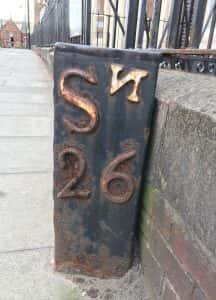 The skyline immediately ahead is dominated by the tower of St George’s Presbyterian Church on the corner of Stockton Road and Belvedere Road.  This remarkable red sandstone church was designed by John Bennie Wilson of Glasgow in 1890 and follows the style of thirteenth century ‘Early English’ ecclesiastical architecture.  The unusual tower has a tall belfry pierced by soaring lancets that are open.  The design is similar to another of Wilson’s churches in Belfast, but is unique in England, where it dominates the skyline of this part of Sunderland. St George’s was the family church of the Dryburgh family, after William Dryburgh, a Presbyterian minister, retired to Sunderland in 1906.  His daughter Margaret Dryburgh was a missionary working in Singapore when it fell to the Japanese army during the Second World War.  She continued her work as a Christian missionary during her internment, and her inspirational life was represented in the film, Paradise Road.  You can find out more about Margaret Dryburgh here. 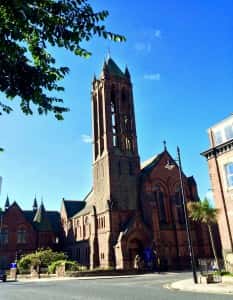 The church has a memorial to Margaret Dryburgh, designed by glass students at Sunderland University. 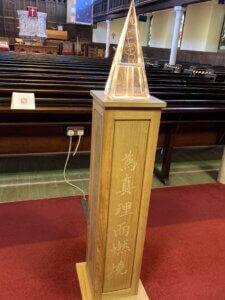 St George’s stands on the corner of Belvedere Road and Burdon Road. Directly across the road from this is a gated terrace, The Esplanade.  This terrace was redeveloped as luxury flats in the early part of the twenty-first century. At the west side of the terrace, facing towards Mowbray Park, is the old Provincial Grand Lodge of Durham, the larger Masonic hall in Sunderland that was built when the one in Hendon proved too small.  The sandstone foundation stone is very weathered, but in the raking early morning sunlight, the text is still just visible and gives us some idea of the importance of the Masonic network in the area. 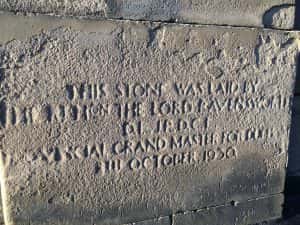 The title of Lord Ravensworth in 1930 was held by Gerald Wellesley Liddell, 6th Baron Ravensworth (1869–1932). His name offers us an insight into some of the other families linked to Sunderland. The family surname of Liddell is here the one that was first awarded the barony of Ravensworth in 1641, when Newcastle merchant Thomas Liddell was rewarded for his loyalty to King Charles I. It is this line of the Liddell family that eventually ends up with a younger son of the 5th Baron Ravensworth, Henry Liddell, as Vice-Chancellor of Oxford, and father of Alice.  Another family name, Wellesley, comes from the 6th Baron’s grandmother’s family, where she was a sister of Gerald Wellesley, who came to Sunderland as rector of St Michael’s Church in 1824. Their more famous brother, Arthur, became 1st Duke of Wellington. From one very weathered foundation stone, we can learn quite a lot about Sunderland’s history.

Further up along, Stockton Road and Burdon Road meet at the narrow top of Mowbray Park and form Ryhope Road.  This is the point where the district of Ashbrooke starts.  This is an area of Sunderland that was largely constructed in the 19th century to house the more affluent citizens of the town.  There are many rambling Victorian villas and gated terraces of grand houses in this area.  Many of the grand houses have since been subdivided into flats or else converted into office use.

One of the most remarkable houses is Langham Tower on Ryhope Road.

This is one of the most distinctive buildings in the city. It was built in 1886-91 by William Milburn for William Adamson, a wealthy trader in ships’ stores. The design in red brick and sandstone, with half-timbered gables and decorative terracotta tiles of potted sunflowers, is derived from Norman Shaw’s design for Cragside House, the Northumberland home of industrialist Lord Armstrong (1883-85). Adamson had requested a vantage point from which he could see the ships in the port, and the gabled tower in the centre of the building serves that purpose.  However, Langham Tower proved unsuitable as a domestic residence and was passed to the local council in the early part of the 20th century when it became home for the teacher training college that was eventually incorporated into the university. The widening of Ryhope Road in the 1960s saw the boundary walls for the property move several yards closer to the house, so the sweeping driveway up to the front door is now a narrow path. 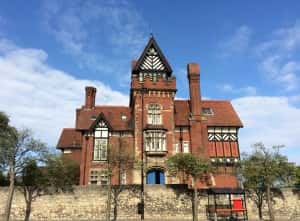 Until July 2016, Langham Tower was one of several Victorian villas that formed part of the campus of Sunderland Church High School which had bought the property from the university ten years earlier. This fee-paying girls’ school was founded in 1884 and one famous former pupil is the poet Eileen Maud O’Shaughnessy. Eileen was a star pupil during her time at the school, regularly winning school prizes for academic excellence.  She gained a place at Oxford University to read English, and was partly funded by a scholarship of £20 per year from the school.  In addition, she was the recipient of an extra £30 per year for her final two years at Oxford, through the Old Girls’ Scholarship scheme in 1925 and Everett Scholarship in 1926.  This is recorded in the Old Girls’ roles of honour that now hang in the Langham Tower bar, following the building’s conversion into a boutique-style pub. As can be seen from the image below, the Scholarships were not awarded as a matter of routine annually, but seem to be for specifically gifted students such as Eileen O’Shaughnessy. What is also notable is that Eileen’s is the only name to appear more than once, which hints at the esteem in which she was held by the school. 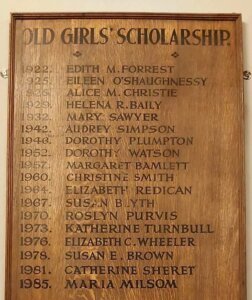 After graduating, Eileen developed her interest in social inequality whilst seeking a job that would satisfy her.  She worked as a freelance typist and proof reader, and studied for an MA in Psychology at University College London.  However, she maintained links with Sunderland Church High.  As part of the celebrations to mark the school’s fiftieth anniversary in 1934, they commissioned her to write a poem, ‘The End of the Century, 1984’.  You can read the full poem here.

The poem looks forward to fifty years in the future. O’Shaughnessey married journalist Eric Blair in 1936. Blair is better known as the novelist George Orwell.  Eileen and Eric travelled to Spain during the Spanish Civil War, where Eileen worked for the Independent Labour Party who were coordinating British volunteers.  The Blairs returned to England in 1937. Eileen died from complications following a hysterectomy in 1946.  Two years later, Orwell published his most famous novel of a dystopian community set in the future.  The original title of the book, The Last Man in Europe, had been rejected by his American publishers and after several attempts, Orwell settled on the title 1984.  One suggestion as to the name of his most famous novel is that he took the title, 1984, from Eileen’s poem.  You can find out a bit more about Eileen and George here.

Further into Asbhrooke is Ashbrooke Sports Club.  This was opened in 1887 and continues to be the home to rugby, football, cricket, hockey, tennis and other sports in the city. It was also home to Sunderland AFC in 1882-83 before it moved north of the river, eventually settling in Roker Park in 1898. A blue plaque marks this more southern home. 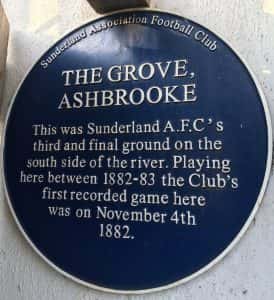 Ashbrooke Sports Ground is also a venue for many local bands, and hosts the largest firework display in Sunderland on 5th November every year.

This picture shows the opening of the sports ground at Ashbrooke in 1887, with fireworks in readiness for the opening ceremony.  The terraced houses around the ground would have been very recently built and, to anyone who knows this area now, it is remarkable how few trees are visible in this picture. 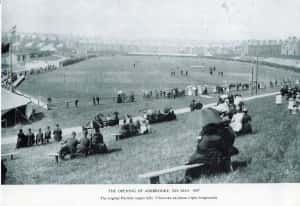