The Green Terrace area beside the Minister is the site of the original church grounds for St Michael’s in the settlement of Bishopwearmouth.  Redevelopment of the area in the early 20th century brought educational buildings to the site, and later in the 20th century, the realignment of the road system to the west of the city brought further changes. However, traces of a much older history remain in its buildings.

At the bottom of Green Terrace is a junction with several main roads, including Chester Road.  At this junction stand several university buildings, including St Mary’s. This building was the first dedicated hospital in Sunderland. Built in 1823 for £3,000, it was designed by Ingatious Bonomi in the Classical style, with brick and dressed limestone to the front and sides, and rough cut limestone walls at the back. When it opened, it had 60 beds and a rudimentary operating theatre. It was used during the first cholera epidemic in Sunderland in 1831. The building proved too small to cope with the needs of a rapidly growing population and it was replaced as the main hospital in the town in 1860 when the Royal Infirmary was built a short distance away on Durham Road. The old hospital became a Catholic school and in 1900 the Roman Catholic Education Authority ordered a redesign of the upper level. Charles Walker of Newcastle designed the triangular pediments along the upper floor and roof, surmounted by crosses which still grace the building today. 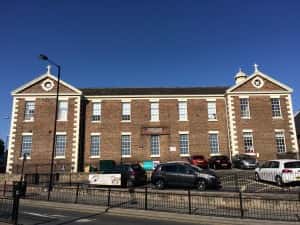 Now part of the University of Sunderland, the building currently forms part of the Northern Centre of Photography and university childcare facilities. However, there is a more infamous local connection to the history of this building, as during its time as a hospital it was the place of employment of serial killer, Mary Anne Cotton. She was found guilty of killing three of her four husbands, supposedly in order to claim their insurance money, and may have killed several of her own children as well as other victims. Her favoured method of killing was arsenic poisoning. She is suspected of killing up to 21 people in total. Cotton was hanged in Durham Gaol in 1873 and is commemorated in a gruesome skipping rhyme:

The design for this building was as a result of a competition, won by Potts, Son and Hennings of London and Manchester. Built between 1899 and 1901, it is in the English Renaissance style in brick and terracotta, the building reflects its institutional purpose as a home for students of science and engineering. The tower has a domed observatory for the teaching of navigational studies. 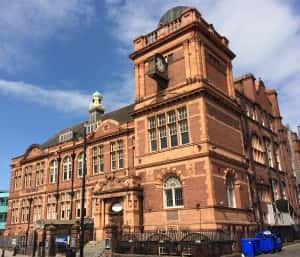 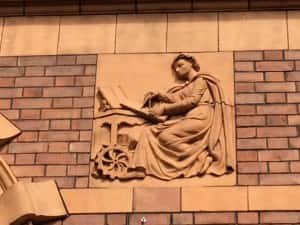 Although now a pub and nightclub, the original purpose of the building is still clear from its exterior decoration.

The building gets its name from Sir John Priestman (1855-1941), a successful local shipbuilder. He set up a charitable foundation, the Sir John Priestman Trust, which provided for the poor, paid for nurses, and contributed to the upkeep and furnishing of church buildings. In 1939, he provided £20,000 towards the building of a library for Sunderland Technical College.  Priestman Building is now part of the University of Sunderland. In 1934 he was made a Baronet of Monkwearmouth in recognition of his contribution to the city. 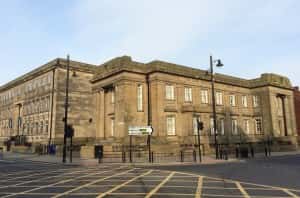 This view of Green Terrace, taken from Albion Place, shows the street as it appeared in the early 1940s.  This colourised photograph is from the Echo Archive, and in the sky can be seen barrage balloons that were suspended across the skyline in an effort to deter enemy bombers during the Second World War. 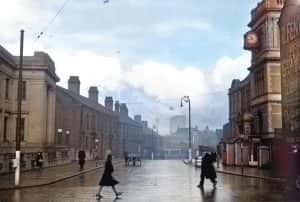 The short terrace of early 19th century houses that face down Green Terrace gets its name from a house that once occupied all of this site.  At a time in the 18th century when the outskirts of Bishopwearmouth were largely residential, several grand houses stood at the top of what is now Green Terrace.  This map by Thomas Robson shows the layout of the streets in this area in 1827, with Albion Place, the house, facing what would later become Stockton Road.  It is interesting to note from this map that whilst one side of Vine Place appears completed, Derwent Street and Olive Street are still being built. 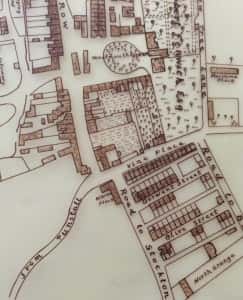 Albion Place was the home of former soldier, poet and antiquary Sir Cuthbert Sharp who rented it when he returned to the town of his birth in 1823 to take up his role as collector of customs on the River Wear.  He lived there until moving to Newcastle in 1845 when he took up the same post on the Tyne.

Some of the grand houses in Green Terrace had been turned into schools by the end of the 19th century, such as Southgate House which stood where the technical college building now stands, and others had fallen into disrepair.  The back garden of the house of Albion Place was developed into smaller terraced houses between 1827-1855, a street which now bears the name of Albion Place. 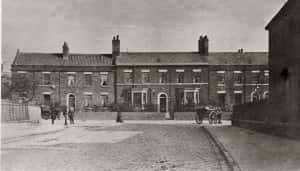 The photograph below shows the view down Vine Place with the corner of Albion Place visible on the right around 1890.  The houses on the left were demolished in the early 20th century to be replaced by Priestman Building.  The house in the centre behind the telegraph pole is Southgate House.  The large pink marble drinking fountain is now further down Vine Place, where it stands at the junction with Park Lane.  The original position is now part of the busy roundabout. 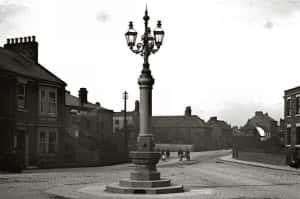 This marble fountain was presented to the people of Sunderland by Stansfield Richardson, a wealthy Sunderland merchant.  It also included gas lighting at the top, but this has now been disconnected and the brackets converted to hold electric lighting.

In the early years of the 20th century, the Stockton Road corner which included the original house of Albion Place was sold for redevelopment.  The photograph below shows the plot marked as being sold for development into shops, with a courteous note to express the hope that this would cause minimal disruption. 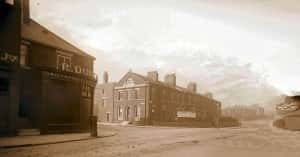 The grand redbrick Edwardian conversation now stands rather incongruously amongst the elegant early Victorian terrace that remains, proudly declaring its modernity in a stone plaque declaring the year 1903 set into the left hand gable.  The building was recently redeveloped and is now the Cooper Rose pub. 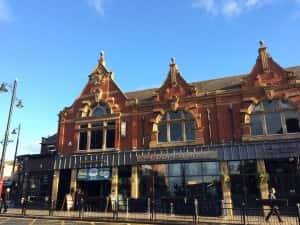 There is a plaque attached to the pub doorway explaining that the name comes from the Cooper Rose vaccinator, used by the Public Vaccinator for Sunderland, Dr Renney, who lived in Albion Place in the 1890s.  In one of the earliest attempts to eradicate disease, the 1853 Vaccination Act had made it compulsory to vaccinate all infants, and the Cooper Rose was one of several different vaccination implements designed during that century, this one patented by Down Bros of London.

Careful observation of the site can also reveal, hidden away at the side of the pub, the original Albion Place house, now rather neglected as it rises above a take-away shop and letting agency at street level.  This is now recognised as one of the oldest inhabited houses in Sunderland. 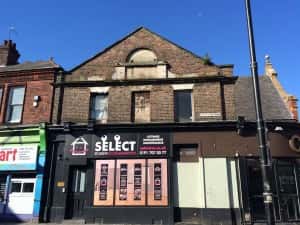 A few steps further down the road to the north, eagle-eyed pedestrians might notice a curious plaque on the upper floors of 9-10 Vine Place. 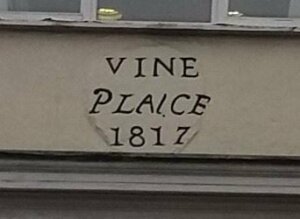 This plaque offers a non-standard spelling of ‘Place’ as ‘Plaice’, and the date of 1817.  English spelling was not standardised until well into the 19th century, so this homophonic variant is perhaps not too unusual.  However, the date is one that has given rise to much speculation as Vine Place doesn’t appear to be complete at this stage until about ten years later.  Local maps show that the south side of Vine Place was built between 1816 and 1826, but as houses with small front gardens. These gardens were built over in the late 19th century as the properties became converted into shops, and the facades as we see them now date from then. Around the same time an ancient wall (shown on the Rain’s Eye Plan) on the north side of Vine Place was demolished to make way for the block of shops that are now on the opposite side of the road.  It seems that the name plaque may have been associated with the perimeter of Southgate House, and was repositioned from that wall at that time. It would certainly offer an explanation for the irregular shape of the plaque as we see it today.

A short walk further south from Vine Place is Tunstall Road, which leads south-east into the Victorian terraces of this still-affluent area of Sunderland.  One of the streets here, Thornhill Terrace, was the location of the veterinary surgery where a newly-qualified Alf Wight worked in the early 1940s.  James ‘Alf’ Wight is better known as the author James Herriot.  Wight had been born in Sunderland, in Brandling Street in Roker, but his parents moved to Glasgow when he was just a few weeks old.  He trained as a vet in Glasgow then moved back to Sunderland, to Brandling Street where his mother’s family still lived, in 1940.  Part of his work in this practice was to care for the dogs at the greyhound stadium in South Shields, stories from which formed one his early books, Vets Might Fly (1976).  Wight moved to Thirsk after less than a year in Sunderland, and became a highly successful writer of novels based on his work as a vet, immortalised in the long-running BBC tv series, All Creatures Great and Small.