As its name suggests, High Street is an area that has prestige. In 1762, Daniel Defoe, on a visit to Sunderland, commented that this street ‘is of great length, as well as good breadth, parallel to which runs another, but narrower’.  Defoe was describing what at the time was referred to as Bishopwearmouth High Street and connected the old port of Sunderland with the area around St Michael’s to the west, the course of which remains today.  The buildings to the east end were at that time of a high status, but as the 19th century progressed, and the two settlements were joined into one town and the economic wealth moved further west.

Hutchinson’s Buildings on the corner of High Street West mark the start of one of Sunderland’s most affluent shopping streets in the late 19th century, connecting with High Street East where the street is intersected by Sans Street.  The street connects the poverty and squalor of Old Sunderland and the docks with the bustling 19th century area that grew up around the bridge.  The buildings that remain in High Street East reflect some of this history.

This example of early Gothic revival was designed by Thomas Moore in 1850. The building was originally the offices of the Poor Law Guardians for Bishopwearmouth. 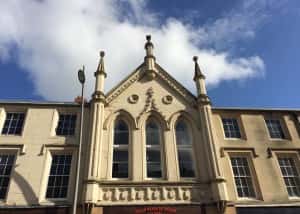 Just off High Street East, round the corner behind the Register Office building runs Lambton Street.  Now the site of the Grosvenor Casino, this was the location of the Lyceum Theatre.  Originally built as a public hall in 1852, the building was converted into a theatre two years later by Newcastle impresario Edward D. Davis. This was destroyed by fire the following year, but quickly rebuilt and re-opened again in September 1856.  The opening night performance at this theatre included a young actor by the name of John Henry Brodribb in its cast.  This was Brodribb’s first stage appearance.  He later changed his name to Henry Irving and was one of the first actors to be knighted.  Sir Henry Irving included Sunderland in his farewell tour in 1904, when he received a civic welcome. 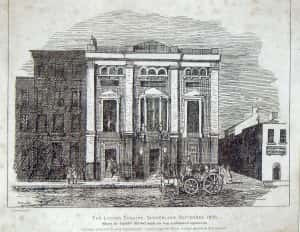 The Lyceum Theatre was again destroyed by fire in 1880.  The site was purchased by the Salvation Army, who demolished the derelict theatre and built their own hostel, designed by J. Williams Dunford.  Another charitable organisation also had its building in this area: the YMCA. 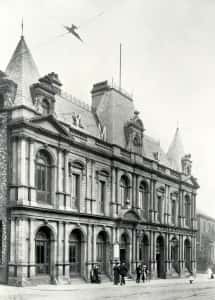 When YMCA moved to their current location on Toward Road, they took the lettering from the outside of the High Street East building with them. 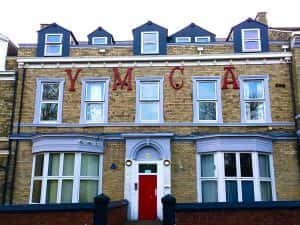 Up until the end of the 19th century, many of these buildings were still residential in the upper floors with shops on the lower floors.  At 188 High Street West, on the corner with Nile Street, William Henry Hills had opened a stationery shop in 1852.  Hills Stationers became a fixture of Sunderland’s businesses until the early part of the 21st century when the last shop closed.  However, in the middle of the 19th century, William Hills rented out some of the spare rooms in his property.  One of these was rented by Thomas Dixon.  Dixon was a highly literate working class man who was encouraged by Hills to develop links with the Pre-Raphaelite brotherhood, eventually achieving fame through his connection with John Ruskin, whose Tide and Tide: Weare and Tyne features letters between him and Dixon.  You can find out more about this fascinating Sunderland resident here.

Beyond Sans Street, High Street East still shows traces of its once-prominent position in Sunderland’s society.  This photograph from the 1890s shows the view from the corner of Sans Street looking down the north side of the street. 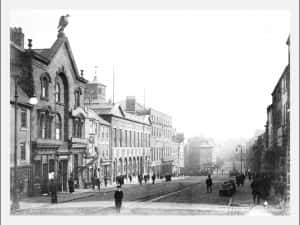 The Eagle Building is clearly visible on the left, and the Exchange Building next to it is marked as the ‘Seaman’s Mission’ by this time.  The crowded buildings further down the street are now long gone, but this view provides an interesting perspective on this once bustling area of the town.

This distinctive building has been the site of a pub since the early 17th century and the current building was originally the home of the Eagle Tavern and Eagle Tobacco Factory, but has had many other uses over the years. Its original wooden eagle statue on the roof was removed for safety reason in the Second World War, then sold to a Jersey-based businessman. The current copy is slightly smaller and was erected during the building’s renovation in 2001, where it distinguishes the skyline from both sides of the river. 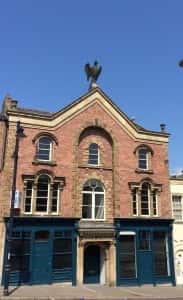 This was designed by John Stokoe of Newcastle and constructed 1812-14 by George Cameron, grandfather of inventor Joseph Swan. At the time, this area was the central commercial district of Sunderland and this building served as public hall, post office, court room and market. The building cost of nearly £8,000 was raised by public subscription and built on land purchased from Sir Henry Vane Tempest. The stucco façade on High Street East contrasts with the more sombre limestone viewed from the river. 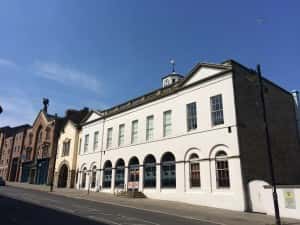 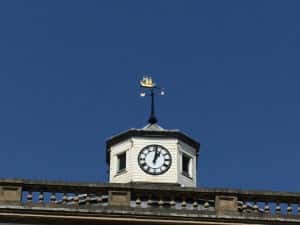 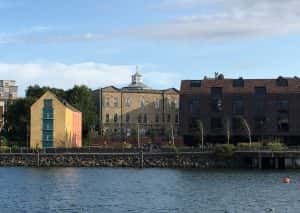 The view of the distinctive limestone facade of the building from across the river also reveals the colourfully-painted building that is Wylam Wharf below this on the quayside. 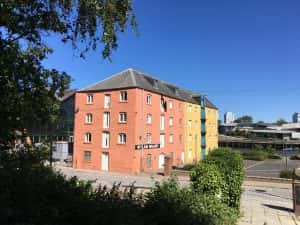 Wylam Wharf was also known as Eltringham’s Wharf, French’s Wharf and, from 1912, the Rose Line Building when it was taken over by the Rose Line Company.  Built in the late 18th century when this was a bustling part of the town centre, this warehouse was made of rubble stone with a brick extension added in about 1820.  It was also licensed as a Custom House where goods chargeable with duty or bonded could be landed and shipped. It was disused once the Rose Line Company moved out in 1986 and fell into disrepair, but was restored in 1995 and is now used as flats and restaurants. The Bonded Warehouse still stands just up Low Row from this building.

For much of the 19th century, the Exchange Building also housed the River Wear Commissioners before they moved to purpose-built offices on St Thomas Street. The Duke of Wellington made an official visit to Sunderland in 1827 and was guest of honour at an event held at the Exchange. At that time, Wellington was still regarded as a great British hero after the Battle of Waterloo in 1815 which had marked the end of the decades-long Napoleonic wars.  For the occasion of his visit to Sunderland 12 years later, a huge ceremonial floral arch was constructed in the street outside the Exchange Building, with flags commemorating his famous victories. 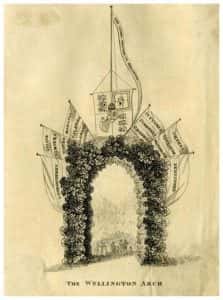 Also present was Wellington’s brother, Dr Gerald Wellesley, who was rector of Bishopwearmouth St Michael and All Angels (now Sunderland Minster), and was also married to one of the Whitburn Liddells.  Sir Walter Scott was also present at that event, as were members of the Liddell family.

Sir Walter Scott was one of the most famous writers in Britain at the time. Several streets in Sunderland have names inspired by his work, such as Abbotsford Grove (named after Scott’s home in Melrose on the Scottish borders); Ivanhoe Crescent (named after the eponymous work Scott published in 1819); Rokeby Street (named after Rokeby Hall, a poem by Scott); and Waverley Terrace (named after the first of Scott’s novels, published in 1814, which also gave its name to the main railway station in Edinburgh).

Sir Cuthbert Sharp was also a guest at the Duke of Wellington’s Exchange Building reception.  The following year, he wrote to Sir Walter Scott to remind him of the visit.  In a letter dated 13 May 1828, Scott responded in verse, mentioning others who were present at the event.  A copy of the poem can be found here

The original house of this name stood on the site that is now occupied by the modern Home Housing Association on the south side of High Street East here.  The house took its name from the lane that led down to the river at this point, and which later became the main ferry landing area for this part of the river. The name itself refers to a well which was used from the middle ages, where ‘bodle’ is Scots dialect for a half groat, which would have been payment for use of the well in medieval times to buy a skeel, or two gallon-measure of water.  Bodlewell House itself was the home of James Field Stanfield (1749-1824) who lived in Sunderland from 1789 after giving up his life as a sailor following his traumatic experiences of working on a slaving ship.  He drew on these experiences to write extensively in favour of abolishing slavery. For more information about James Field Stanfield, and some of slavery’s legacy in Sunderland, see here.

Today, a blue plaque on the side of Bodlewell House marks Stanfield’s occupation there. 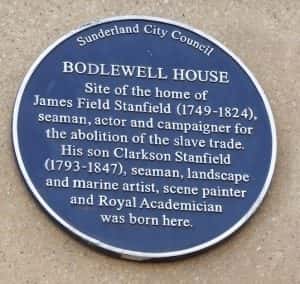 Lanes such as Bodlewell Lane leading off High Street East down to the quayside have since been demolished, but early photographs of some of these give an indication of the poverty that hid behind the grandeur of the main street.  This photo from the late 19th century is of Long Bank and on the left shows a small boat that has been dragged up from the quayside. 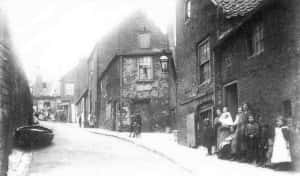 One of the few remaining lanes is Bull Lane, which leads between two of the few remaining ‘Old Sunderland’ buildings on High Street East, just beyond the Exchange Building.  On one side of this lane is the Butchers’ Arms, formerly The Clarendon.  This claims to be the oldest pub in Sunderland, with continuous use under various names since 1724.  It is famous for the capped smuggler’s tunnel in the cellar (it is now thought that this tunnel was actually one that linked to a coiner’s den rather than to the docks and so less directly to smuggling).  The lane itself is marked by a blue plaque. 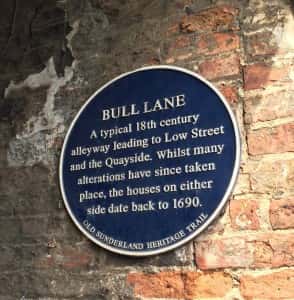 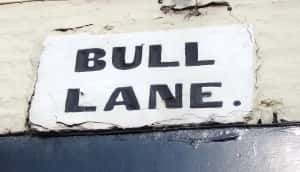 This photo below shows the pub in the 1930s, although now only the buildings on either side of Bull Lane still stand.  The traces of the painted advertisement on the side of the end building can still be seen today. 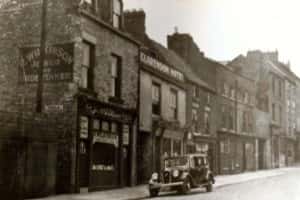 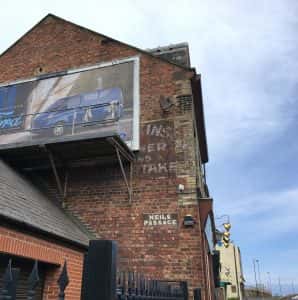 Just beyond this block of buildings is the last building on this side of High Street East before the port: The Boar’s Head Pub.  There has been on a pub on this site since 1728, making this the second oldest pub in Sunderland.  Recently refurbished, this pub has a terrace at the back offering a spectacular view of the river. Inside, the walls are decorated with old photos and prints of Sunderland, thanks to a collaboration with Sunderland Antiquarian Society.  In June 2018, a blue plaque to a local resident was also added to the exterior wall, less out of reach of vandals than out of sight of all but the most observant.  This blue plaque commemorates the life of Joseph Ray Hodgson, who was a champion lifesaver born in the East End of Sunderland.  Although moved to London in the 1860s, he was a central figure in one of the best known paintings of James Stokeld (1827-1877), ‘Last Man Ashore’.  The The picture portrays Sunderland Coastguards rescuing sailors from a wreck using a rocket and a form of breeches buoy equipment along the South Pier at Sunderland harbour.  Hodgson is thought to be the central figure carrying one of the sailors. 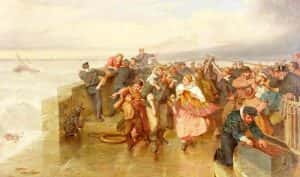 In preparation for the Tall Ships event in 2018, local artist Frank Styles has painted a series of images along the concrete wall that leads from here to the port.  These offer a chronological series of images of ships built on the Wear over the last 300 years. 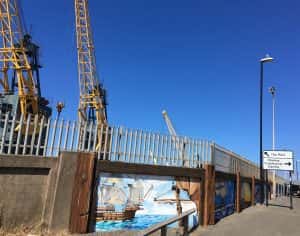