The original castle on this site was built by the Hylton family shortly after the Norman conquest in 1066. The Hyton family had sided with William and, in gratitude, he gifted them land on banks of the River Wear. In the late 14th century, this was rebuilt in stone. This stone building was greatly altered during the 18th century. The castle remained in the Hylton family until the death of the last of that male line in 1746. Various other owners altered the building, including a long period of ownership by the Strathmore family, who also owned Gibside Chapel. A businessman called Simon Temple rented the castle from the Strathmores and, in keeping with the architectural fashions of the period which can also be seen in the Register Building on High Street East, he added Gothic embellishments during the Gothic revival of the early 19th century.

However, the castle fell into disuse again after Temple’s business failed. Another local businessman, William Briggs, bought the castle from the Strathmores in 1862 and set about making it more ‘authentically medieval’ by demolishing the north and south wings, gutting the interior, and adding various other attributes of later Gothic fashion. Briggs’ son inherited the castle and lived there until his death in 1900. 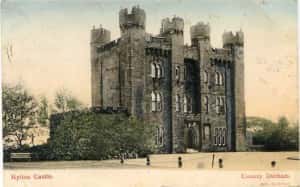 The building remained largely unoccupied after that and fell into disrepair. It was finally passed to the Ministry of Works in 1950 after a local campaign to save it from being demolished. The castle was granted Grad 1 listing in 1949 and, since 1984, has been under the care of English Heritage. The exterior of the building still offers a glimpse of its past where the west façade in particular still clearly shows twenty shields of arms to represent the political allegiances of the early Hyltons. The castle is reputed to the be haunted by the spirit of a murdered stableboy, Robert Skelton. There are various stories as to why Skelton was killed, but the early seventeenth century 13th Baron Hylton is generally thought to have been the murderer. The associated ghost is recorded throughout the castle’s occupation from that time on, usually heralded by the cry ‘Cauld! I’m cauld!’ (cauld is local dialect for cold). This story is repeated in many records of folklore, complete with the song that the spirit is supposed to have been heard singing: 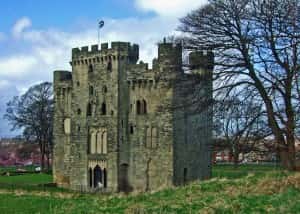 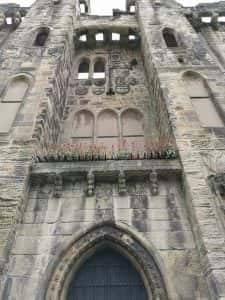 A closer view of the crests still visible on the west façade.  Photo courtesy of Colin Smith.