James Field Stanfield (1749-1824) was born in Dublin but spent most of his later life in Sunderland.  He initially trained for the priesthood but did not go on to take orders.  Instead, he became a sailor and, as such, was the first ordinary seaman involved in the slave trade to write about its horrors.  He described conditions on board slaving ships as ‘floating dungeons’.  In 1788 he wrote Observations on a Guinea Voyage, which is a vivid account of a trip to Liverpool to Benin, West Africa, on a slaving ship.  He also published The Guinea Voyage as ‘a poem in three volumes’ in 1789, featuring the description:’The direful Voyage to Guinea’s sultry shore / And Africa’s wrongs, indignant Muse deplore’. He wrote a series of letters describing the horrors of the conditions on these ships to his close friend and leading anti-slavery campaigner, the Reverend Thomas Clarkson.  Stanfield’s evidence included the additional argument that the slave trade was extremely destructive to the lives of the English sailors, describing the psychological trauma the men suffered.  Thomas Clarkson was a founding member of the Society for Effecting Abolition of the Slave Trade, and he included Stanfield’s writings in the evidence this society collected.  Passages from Stanfield’s writing were used extensively in antislavery pamphlets.

Stanfield became an actor in later life and in 1789 joined the Scarborough-Sunderland theatre circuit before setting up his own theatre company in 1799, based in Sunderland. He was the principal founder of Sunderland’s subscription library in 1795, which later housed the subscription museum in 1810 before becoming the Literary and Philosophical Society.

Stanfield’s son, Clarkson Stanfield (1793-1867) was named in honour of the Reverend Thomas Clarkson.  Like his father, he spent many years at sea before becoming a successful theatre scenery painter.  This translated into a highly successful career as an artist, famous for his maritime scenes. His paintings can be found in galleries, museums and public buildings around Britain, including Sunderland Museum and Winter Gardens.

A plaque recording the perceived major achievements of the two Stanfields is now located in Sunderland Museum. 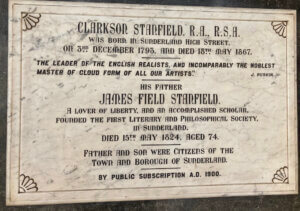 Research carried out University College London into the compensation paid to slave owners after the final abolition of slavery across the British Empire in 1833 shows that there were slave owners living in Sunderland at that time.  It seems a family of gardeners, the Nobles of Bishop Wearmouth, had inherited human property in the Cave River Plantation in Jamaica.  The Nobles ran a tenanted market garden in Hendon.  By 1834, the ownership of 35 people had been divided across the family and so the claim for compensation was handled by Joseph Young, a solicitor whose office was in Hartley Street, Old Sunderland.  This was just a few minutes’ walk from Bodlewell House.  The family received £770 10/11 in compensation. The slaves themselves received not a penny. The Noble family’s market garden was sold in 1841 when the land was used as pleasure gardens, still known as Noble’s Gardens.  The land was eventually swallowed up by the sprawling urbanisation of the mid 19th century, however a street in Hendon still bears the name Noble Street, an unexpected legacy of Sunderland’s only slave-owners.