There are distinctly different themes to the sculptures along the north side of the river, with the division largely occurring at the point under Wearmouth Bridge. The astrological theme that stretches from this point to the coast is part of the trail that you can find in more detail here.

Turning upstream at the bridge, the industrial legacy of this part of Sunderland is more visible than it is downstream.

One of the most recognisable features of Sunderland’s skyline is the giant canopy of Sunderland AFC’s home ground.

Built on the site of Wearmouth Colliery, the home of Sunderland AFC dominates the city’s skyline. Following the Taylor Report (1990) into safety in football stadiums in Britain, the football club had been looking to build a new stadium to replace the much-loved old Roker Park ground which was deemed inappropriate for modification to all-seater as required by the Taylor Report. Several sites were considered, but eventually the site of the colliery was chosen. This had closed in December 1993 after 158 years of mining on that site. However, the location was ideal as it was close to the site of Roker Park and also the city centre with good transport links. The new stadium was built by Ballast Wiltshire at an initial cost of £15 million. The stadium was opened on 30 July, 1997 by Prince Andrew. It was further extended in 2000 to increase the seating capacity to 49,000, bringing the total cost of the build to £23 million. The new stadium’s name was chosen to reflect the miner’s safety lamp and thus the mining heritage connected to the site. There is a statue of a Davy Lamp at the entrance to the stadium by the ticket office. The stadium hosts rock concerts during the summer, and since 2004 has been the location of graduation ceremonies for the University of Sunderland.

In the area immediately surrounding the stadium, there are several statues of note.  These include Sean Hedges-Quinn’s Bob Stokoe statue, showing the manager of the 1973 cup winning side in his famous pose of jubilantly running onto the pitch at the end of the game. 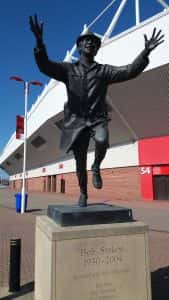 Another statue, close to the main entrance, is called ‘To the Fans’ and shows a man and woman standing with arms raised at the front, whilst two children reach up for a football behind them.  The statue, by Carl Payne, Andy Edwards and Julian Jeffrey, was unveiled in 2002, and references the famous Soviet statue, ‘Worker and Kolkhoz Woman’ statue from the 1937 World’s Fair held in Paris. That statue was later moved to Moscow. 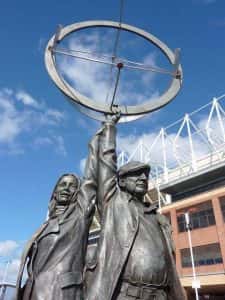 The oldest sculpture on this site is the one that stands by the entrance off Southwick Road and is part of the original plan for the stadium.  This is a 4m high Davy lamp that contains a light that is never extinguished. It was designed by Fulwell sculptor, Jim Roberts, and references the location of the football stadium on the site of the former Wearmouth Colliery.  It also links with the invention of the miner’s safety lamp by North East inventor, Humphrey Davy. 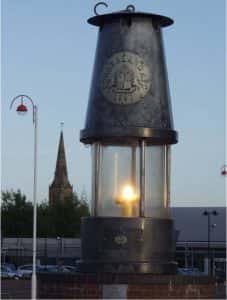 The sculpture tails that span along the north bank of the river are divided into two distinct parts at the point where Wearmouth Bridge dissects the quay.  To the east, the emphasis is on ship building and marine life; to the west, it is the mining history that is the focus.

In addition to the more recent artworks, there is still a great deal of evidence of the industrialisation of the area, such as the remains of the quays at various points where the colliers would be loaded with coal from Monkwearmouth Colliery. 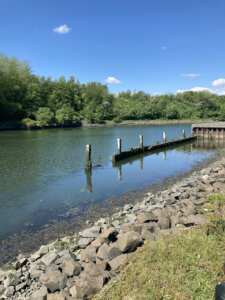 Now almost invisible from this side of the river, the first sculpture on this side of the bridge is ‘Men of Steel’ by Graeme Hopper and shows steel men pushing boulders of coal uphill in homage to the generations of miners who worked at Wearmouth Colliery where the Stadium of Light now stands. This is accessible through the stadium carpark at this point, but is largely invisible from the lower footpath as the trees are overgrown.  A better view is available if you are on the path on the south bank of the river at this point. 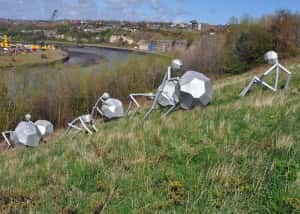 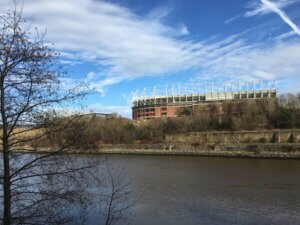 The Men of Steel sculpture is just visible on the bank below the far left corner of the stadium.

The massive brick structure that dominates this part of the riverbank is all that remains of the coal staithes that once lined both sides of the river at this point.  The circular orifice in the centre is where the transporting belt would have delivered coal into the colliers waiting at the quayside.  Although heavily vandalised, this staithe is Grade II listed and remains one of the most impressive pieces of industrial architecture on the entire riverbank.

The remaining brick structure is rather a puzzle to many, but the image below of  similar but smaller staithes slightly further up stream may help clarify the purpose of the structure as being integral to a larger wood and metal arrangement for delivering coal to the waiting colliers. 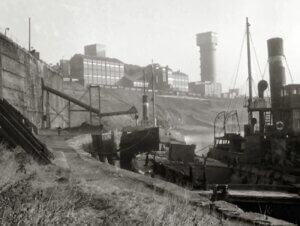 Staithes below Southwick Road, with Wearmouth Colliery in the centre. Image courtesy of Sunderland Antiquarian Society.

There are several bronze plaques laid in the footpath along the riverside up to the curve of the river at Southwick.  These all relate to the coal workings in the area and provide a link to the fact that the coal staithes stretched along both sides of the river, bringing coal from local mines to be loaded onto ships docked in the quays.  An example of such a plaque in the footpath close to start of this stretch gives a plan of the scale and extent of the coal mine at its peak. Interestingly, there is a spelling mistake on this: Ryhope is misspelled ‘Rhyhope’ (visible in the bottom left corner). 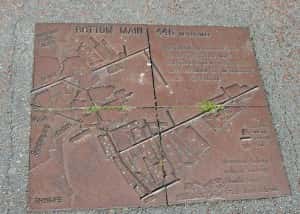 Along the path, at various points, are markers to show the location of the coal seams through which the pits were dug.  An example of such a marker is shown here, where it represents a pickaxe showing the location of the Maudlin seam.  The “handle” of this axe is covered in text which mixes different mining terms such as “after damp” and “out bye”, as well as local dialect terms, such as “marra”. 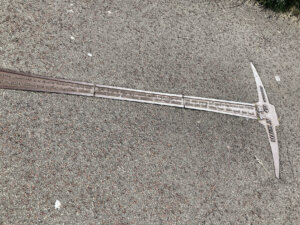 Another marker, for Hutton seam, gives details of life as a miner, such as the: ‘Shifts were 8 hours, two hours each shift was taken up walking between the shaft and face, when wages were not earned: 1930s”.

Other plaques offer more insights into the lives of the workers and their families.  For example, the Ryhope Little plaque gives details of the life of Sarah Seed, the wife and mother of pitmen:

Mother only slept in her bed at the weekend.

Father Jack and Harry worked as marras / father working the stone and the brothers the coal / all pick and shovel work / the shifts began at 10pm 4am and 10am / only one marrar working the coal face at a time.

Mother had to prepare food and hot water in rotation for the leaving and returning men / evening night and day – as well as for the children going to school / morning noon and evening / she caught what sleep she could in her chair by the fire. 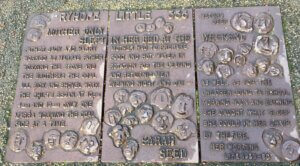 A large bronze ‘cap’ contextualises the other plaques, marking the site of Wearmouth Colliery.  The hellish environment in which miners worked is highlighted on this piece of sculpture, with half the edge engraved with a quotation: “Ah, my God, it is the mouth of hell! None but a madman would go there”, attributed to Grand Duke Nickolas of Russia. 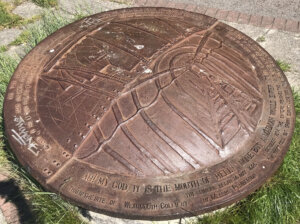 Other plaques are in a more naturalistic form and show some of the wealth of fossils that were unearthed in the course of hewing out the coal. 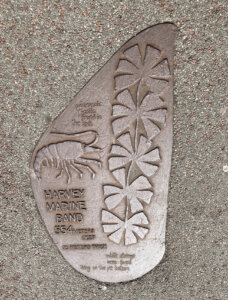 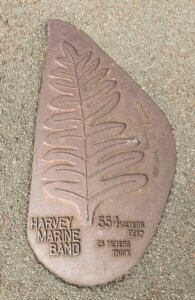 A more three-dimensional sculpture on the path where the river curves dramatically upstream is the marker for Probate Brockwell Bottom seam, and is a column composed of pick handles, rope, miner’s head-worn lights, and tin bate boxes. 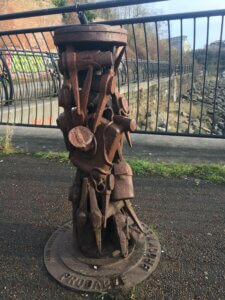 Coal mining is not the only industrial legacy on this side of the river.  There is also the lime-kiln works. The kilns are located close to the site of Wearmouth Colliery, reflecting their place as a consumer for the lower quality ‘dross’ coal, and the local sandstone quarry.  Lime was one of the major exports from the town, with remnants of the limekilns still in place dating from the late eighteenth century.  Other limekilns were located across the river at Pallion, and up the coast at Fulwell. The Fulwell kilns were notorious in that the light from them was known to mislead ships away from the harbour entrance.  Stretching up nearly 12 meters from the quayside, the remaining stretch of limekilns at Southwick is an impressive reminder of this industry.  The actual kilns are Grade II listed, just as the remaining brick coal staithe. 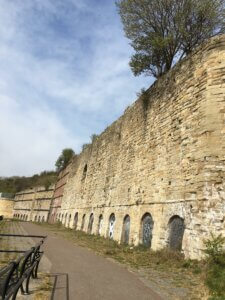 A mural engraved into a new band of sandstone wall at the furthest end of the stretch of kilns gives the ‘recipe’ for lime, whilst this is repeated with embellishments in the bronze plaques that run under this band. 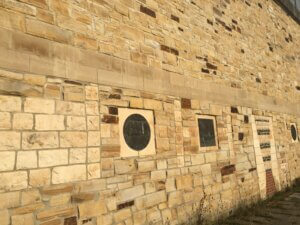 The limekilns themselves are bricked up, but provide excellent nesting accommodation for jackdaws, ravens and carrion crows.  The “title” plaques are found, furthest to the left and right, offering a further details of the history of the kilns (complete with the quirky spelling: waggon, that is something of a characteristic of the art work on this part of the quay):

Built around 1800, three kilns were supplied with stone from quarries on Carley Hill.  This came down by waggon, steadied on the final decent by the windlass.

The image on the plaque shows the wagon-way supported by stilts running above the three kilns. 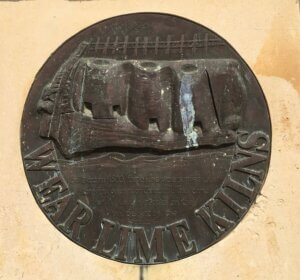 A second plaque shows the “chemistry of lime”, with the three stages of details: Calcining; Slaking; Reversion. 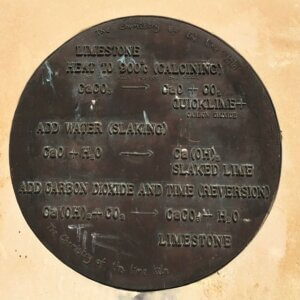 Other plaques show how lime was transported from the kilns, and several of the uses it was put to.  For example, in the production of light.  This plaque explains how this was invented in 1825 and first used on stage in 1837, hence our use of the term ‘limelight’ to indicate someone or something has a central or starring role. 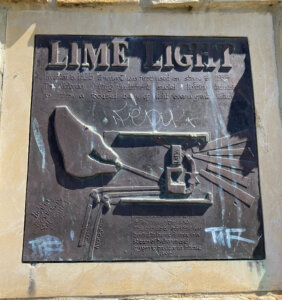 Another use of lime, that continues to this day, is its place in agriculture, as recorded in the plaque below. 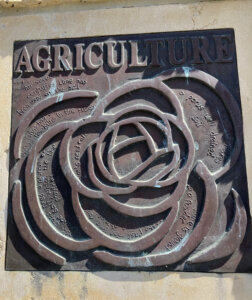 The use of lime in production of glass also led to the development of a thriving glass industry around this part of the river.  The image below shows the area in the early 19th century , with the glass making kilns dominating the skyline.