Since 1992, when Sunderland was granted city status, the church of St Michael and All Angels and St Benedict Biscop has been known as Sunderland Minster. For over a thousand years there has been a church here; in the 1930s archaeologists found Saxon stones on the site. Most of the church has been rebuilt over time, but the east part of the chancel (the space surrounding the altar) is medieval. It was the parish church of Bishopwearmouth (south of the Wear). During most of its history, this church and its parish attracted huge rents which meant it was one of the most valuable clerical livings in England.  As a result, it drew many prominent men to be its rector, often the younger sons of earls and dukes.  The list of names on the 20th century rectors’ board inside the church gives many names which were later used as street names around Sunderland, such as William Paley (Paley Street, behind the Empire Theatre) and Robert Gray (Gray Road).  Rector Robert Gray was related to Reverend Robert Gray, who was rector of Holy Trinity until his death in 1838.  The daughter of Bishopwearmouth Robert Gray married George Mowbray, of the wealthy Mowbray family.  Elizabeth Gray Mowbray’s legacy is visible today in the almshouses to the east of the church (see below). 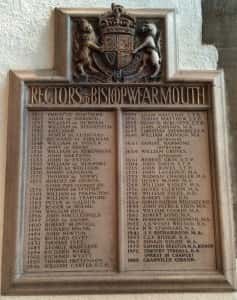 Amongst these men, Paley is perhaps the best known. 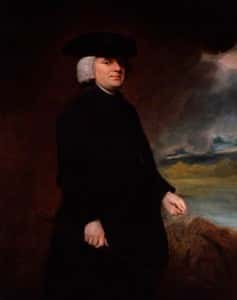 William Paley was one of the most influential, but also controversial, clergymen of the eighteenth and nineteenth centuries. Born in 1743, Paley rose as a lecturer on moral philosophy in Cambridge. His book The Principles of Moral and Political Philosophy (1785) advocated a modern, utilitarian approach to religion and morality. Partly as a reward for his writings against the irreligion of revolutionary France, in March 1795 Paley was granted the rectory of Bishopwearmouth. Starting with a famous analogy between the universe and a watch, Natural Theology (1802) argues that the natural world reveals God’s intelligent design of the universe. He was one of the most ardent anti-slavery campaigners of the late 18th century. He died in Lincoln in 1805. You can find out more about William Paley here.

In 1824, Gerald Wellesley was rector. He was the younger brother of Arthur Wellesley, Duke of Wellington.  Wellesley was responsible for attracting many highly cultured visitors to Sunderland during his time as rector, and Wellington himself visited several times, including in 1827 when an official celebration was held in the Exchange Building.  You can find out more about this here.

Later, Rev. John Eden was rector between 1848 and 1864, and he was responsible for redeveloping much of the church. The old rectory that had stood behind the church was demolished and the Rector’s Park site was sold for development (now the site of the Empire Theatre and Dun Cow pub). A new rectory was built on Gray Road in Ashbrooke, where it still stands today although long since converted into secular flats after a stint as part of the university’s School of Education.

A great deal of the church had gone into decline and was rebuilt between 1806-8, during the period when Sunderland was modernising, with further additions in 1849 to accommodate a growing congregation. The church was again substantially rebuilt between 1932-35 in the Gothic revival style, funded in part by a £35,000 donation from Sir John Priestman. 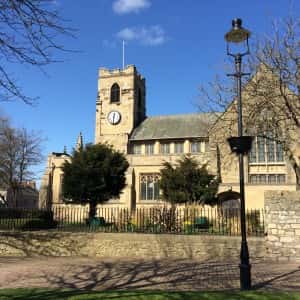 This parish map of Sunderland from 1883 gives an indication of the extent and prospective wealth of the St Michael’s living. It is the parish marked in pink that extends from the river southwards to what is now Ashbrooke and Thornhill. 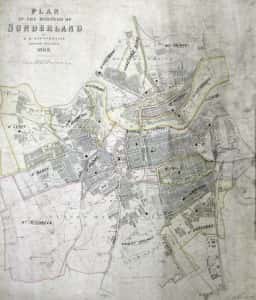 The church was damaged during Luftwaffe bombing raids in the early 1940s and the East Window in particular needed to be replaced.  The current window was unveiled in 1950 and was designed by D. M. Grant. It features the words of the Apostles’ Creed (omitting two phrases: “He descended into hell” and “To judge both the quick and the dead”). The pictorial representations link the Ascended Christ, St Michael and the Mercantile Marine with references to the city of Sunderland and the Diocese of Durham. 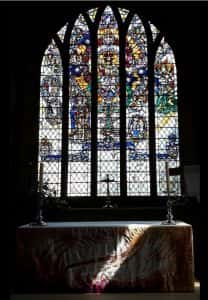 The church stands on a raised area of ground that borders Green Terrace on the south side. When the new ring road was being constructed in 1988, it cut through the old Hind Street area here and revealed the burial ground that had been used by the parish of Old Sunderland in 1832 to meet the demands for burials after the first major outbreak of cholera there. Dr William Reid Clanny was the principle medical officer whose report of the outbreak helped form our understanding of the disease later in the century.  Sunderland University’s Clanny House is named in honour of him. The burial ground in Holy Trinity parish has been overwhelmed by the number of people who died in this early outbreak (205 in total) and so had to call on the neighbouring parish. The remains were removed and re-inturred in Bishopwearmouth Cemetery and a blue plaque today reminds us of this. 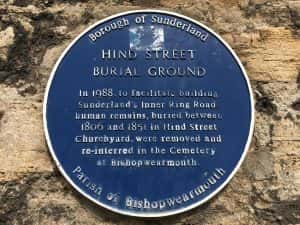 These almshouses were designed by Edward Robert Robson and erected in 1863, funded by Elizabeth Gray Mowbray. They replaced the earlier almshouses, erected in 1772 by Jane Gibson. This earlier complex is commemorated in a Latin inscription on a stone positioned at the left hand side stepped chimney stack. 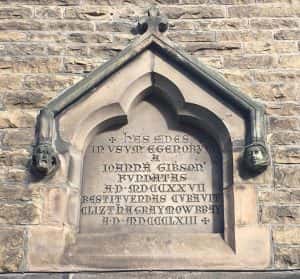 Edward Robert Robson had trained under John Dobson in Newcastle before moving to London to work for Sir George Gilbert Scott’s practice. The design for the Mowbray Almshouses follows Gilbert Scott’s and Pugin’s notion of recreating medieval architecture in the contemporary world. 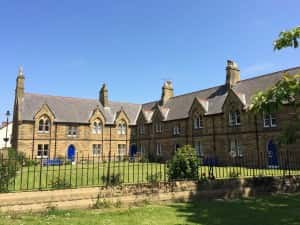 The foundation stone to the earlier almshouses is now lodged in the sunken garden wall opposite these buildings.  This stone records the date of 1721, which relates to the first almshouses on this site. Canon John Laurence is named as the originator, with the 1872 rebuilding here being credited to Canon Cockin.  In both dates, the contribution of the women has been ignored. 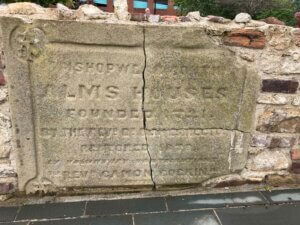 These almshouses back onto Crowtree Road, most of which is now taken up with The Bridges shopping centre. However, just along from this and still behind the almshouses are Maritime Terrace/Street, leading into Blandford Street. Blandford Street was originally domestic housing, but over the years developed into a busy shopping street that has most recently been pedestrianised. At the Crowtreet Road end of Blandford street is Maritime Terrace. 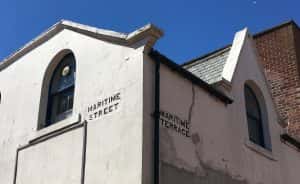 The name of the street is derived from the fact that this bordered the old seamen’s almshouses, as shown in this map of the area from 1910.

This photo from the 1930s shows the buildings as they were rebuilt in 1819. By this time, Blandford Street (in the distance) had been developed as a commercial area.  If you look carefully, there are milk bottles on the doorsteps, indicating that this was taken early in the morning. 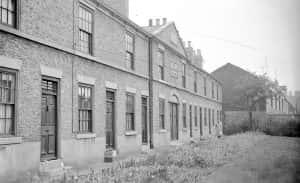 Back in The Green, the sunken garden was developed in 2020 and features walls made from bricks and stones reclaimed from the land during its redevelopment. There are several of the old street names from this area embedded in the wall, and a helpful sign explains the changed geography of this area.  The seating around the edge of the sunken garden provides a restful haven.