Sir William Herschel was born Friedrich Wilhem Herschel in November 1738 in the Electorate of Hanover in Germany.  He was one of ten children to Isaac and Anna Herschel, who were Lutheran Christians.  At that time, Hanover and Britain were united under the reign of George II.  Isaac was a gifted musician and worked in this capacity in the Hanoverian Military Band.  William and his brother Jakob followed their father into this profession.  In the winter of 1755-56, France threatened war on Britain and Hanover.  Both Jakob and William were then still with the band of the Hanovarian army.  Jakob was given permission to leave the army to take up a place as court musician in Hanover, but the paperwork for this did not arrive in time and, with William, he followed the army into the Battle of Hastenbeck on 26 July 1757, which led to the defeat of the Hanoverians and their allies.  In the ensuring chaos, William escaped conscription into the defence force and, with their mother’s help and father’s support, William and Jakob fled to England.  Once things settled down in Hanover, Jakob returned to take up his post as court musician in 1759, but William continued to live in England.  In his memoir, he mentions the lack of opportunities for himself in London but took the chance to travel to Richmond, Yorkshire on the invitation of Henry Vane, 2nd Earl of Darlington who was colonel of a militia that was in need of a band.  Herschel became the first bandmaster for the Durham Militia in 1760 and continued on a monthly contract to compose and teach music (but not play himself) until early in 1761.

He eventually based himself in Sunderland in early 1760, where he continued to develop his English.  In between fulfilling his commitments to the Earl of Darlington’s regimental band, he eked out a living teaching music to local wealthy families.  He lived in various lodgings in what is now the Sunniside area of Sunderland, which placed him between the two main parishes of Sunderland and Bishopwearmouth and also within easy reach of the ferry to cross the river and make his way up to Newcastle.

In February 1761, he came to the attention to Charles Avison, the famous musician who had returned to his city of birth and was working as church organist at St John’s and later St Nicholas’s in Newcastle as well as being director of the Newcastle Musical Society which put on highly profitable concerts. Herschel was engaged as first violin and soloist in Avison’s orchestra.

Herschel composed six symphonies during his time in Sunderland. The full list of these symphonies runs:

Sunderland seems to have provided Herschel with the security and stability to start what would become an extremely successful career.  In his memoirs, he recalls that it was in this period that he found the leisure time to resume his interest in mathematics, which he regarded as vital to the understanding of harmony in music.  He recounts how he was able to read ‘Dr Smith’s Harmonics’, which directed him to further reading in the area of mathematics that would eventually lead to his divergent interest in astronomy (something he had started to take an interest in as a child when his father had pointed out the constellations to him).

Herschel moved from Sunderland in early 1762, settling eventually in Bath, which was then a fashionable spa town.  His sister Caroline joined him in England in 1772, where she became a member of the Bath Orchestra.

William became a friend of Rev John Michell, who was a Cambridge mathematics professor.  Michell was the first person to have published a scientific work proposing the existence of black holes, and is known as the father of seismology and of magnetometry.  Through his acquaintance with Michell and other leading astronomers, Herschel developed his interest.  He built his own reflecting telescopes in collaboration with his sister, Caroline.  His work led to him discovering the planet Uranus in 1781, two moons of Saturn (Mimas and Enceladus), and introduced into astronomy the term ‘asteroid’.  His astrological studies also led to him discovering infrared radiation in sunlight, and in 1820 he helped found the Astronomical Society of London, which later became the Royal Astronomical Society.  After his discovery of Uranus in 1781, George III appointed him Court Astronomer and granted him a pardon for his army desertion that had led to him seeking political refuge in Sunderland 20 years earlier.

This portrait of Herschel, painted around 1795, shows him holding a paper bearing the words, ‘The Georgian Planet With its Satellites’, together with a drawing of a planet and its moons. This probably refers to Herschel’s discovery of Uranus in 1781, which he initially wanted to call ‘Georgium Sidus’ after his new patron, George III.  The painting how hangs in the National Maritime Museum, Greenwich. 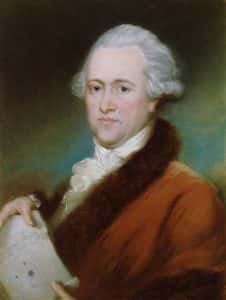 William Herschel’s son, John, was a pioneer of early photography. He took the work of Henry Fox Talbot as his starting point and his ground-breaking research included his discovery of sodium thiosulphate as a fixer for photographs, and in fact he coined the term ‘photograph’.  John’s son, William James Herschel, continued the family’s reputation for invention and discovery, and became the first European to recognise the unique identifying properties of fingerprinting after working for the Indian Civil Service in the 1850s.  Another son, Alexander, inherited his grandfather’s interest in astrology and became the first professor of physics and experimental philosophy at Durham University in 1871.  He carried out ground-breaking work on meteors and comets.