Thomas Dixon (1831-1880) worked as a cork-cutter in Sunderland.  Although working class, he was highly literate.  He lived in a room in a house owned by William Henry Hills at 188 High Street West (a site which now occupied by the expanded Sans Street road).  Hills had an extensive library and was also a good friend of William Bell Scott, the headmaster of the School of Art in Newcastle.  Through Scott, Dixon got to know many of the main Pre-Raphaelite painters and their circle, including Tennyson, Caryle and Rosetti.  He moved to at 57 Nile Street in the late 1850s but continued his letter-writing contact with the literary and artistic circle he had met through his time in Hills’ house. Amongst these, John Ruskin, the celebrated artist, writer and critic, had developed a strong interest in social equality.  He wrote 25 letters to Dixon on the subject of the laws of work, published as Time and tide, by Weare and Tyne (the additional ‘e’ on Wear being an artistic flourish on the part of Ruskin, much to the disdain of Hills).  The letters, written between February and December 1867, each start with the salutation ‘ My dear friend’.  They are set against the mood of political reform that permeated society at that time.  Ruskin had developed an interest in citizenship and labour over the years and had engaged with John Stuart Mill, Adam Smith and Thomas Malthus in various essays on the subject, arguing for the veneration of the skilled labourer.  The themes he picked up on in his letters to Dixon emerge from this social argument, as he promoted honesty in work, cooperation in society, and just employment relations.  Dixon himself, although a lowly cork-cutter, was very well read and had an already established interesting in literary and artistic matters through the Sunderland Literary and Philosophical Society.

Dixon received many books as gifts from his correspondents.  However, visitors to his house often commented on the absence of books and, when asked, Dixon would explain that he saw no need for books as ornaments so once he had read and absorbed a book’s content, he would donate it to the library.  Dixon also sat for several of the artists he corresponded with.  Alfred Dixon (not relation) painted him, and this portrait now hangs in Sunderland Museum and Winter Gardens. 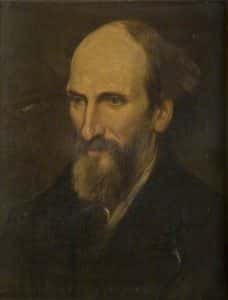