The blue plaque outside 173 High Street West marks the contribution to the anti-slavery campaigns made by the Quaker women in Sunderland and the region more widely.

The block of buildings that are numbered 170-173 are all that remains of a once-affluent terrace of Georgian properties. Built as a commercial premises, with a double-height front window, 173 was bought by George Binns in 1811 to be the new premises of his growing drapers’ business.  This expanded further under his son, Henry, who took over in 1836 and by 1884 it had moved to Fawcett Street, which is where many people in Sunderland might recall it last being located.  Also in this row of buildings is 170 High Street West, which was the building owned by another Quaker family, the Backhouses, for their bank.

The Quakers were long-standing abolitionists, and the Sunderland Quaker meeting minute books show that they were active in this campaign from the early 18th century. When slavery was outlawed in the British Empire in 1807, they continued to raise awareness of the plight of those people still enslaved.  Sunderland became particularly well known for one campaign whereby the Quaker shop keepers refused to stock (slave-produced) West Indian sugar, and this act was widely copied by other grocers in the town. This was just one of the awareness-raising campaigns that the Quaker women devised. The blue plaque in Sunderland is attached to the building that was once the Binns department store.  The Binns family were one of the prominent Quaker families in the town, and their shops were amongst those that refused to sell slave-produced goods. 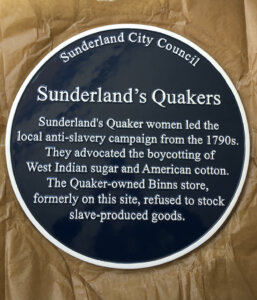 Sunderland University BA History students, Chantal Rhiannon Mouzon and Tessa Hope, have been researching the abolitionist work of Quaker women locally.  You can find out more about the anti-slavery campaigns of the region’s Quakers and the role women played in their campaigning here, and more about the work of one notable Quaker woman, Elizabeth Pease here.