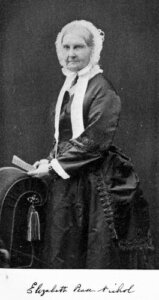 With the fantastic announcement of the Blue Plaque commemorating the work of Quaker Women in Sunderland and their anti-slavery campaigns from the 1790s, I believe this is an important moment to pay homage to a woman who was active in such campaigns from the local area of Darlington: Elizabeth Pease Nichol.

Elizabeth Pease was born in Darlington, 5th January 1807. Her educated, wealthy family were of great prominence in the local area, contributing to the development of the Stockton-Darlington Railway line, and engaging in philanthropic work. Elizabeth Pease, like her whole family, held Quaker beliefs, which played a significant, conscious role in the work she engaged in throughout her life. Pease’s work, particularly in the anti-slavery movement, gained prominent support for her endeavours in the area, and it is acknowledged that ‘Pease’s Quaker beliefs influenced her choices and her conduct’ with her ‘insistence on human right and the equality of all souls’1.

Elizabeth Pease focused on issues of social reform, especially the anti-slavery campaigns at the national and international levels. Pease contributed significantly to the Anti-Slavery Society founded in 1823. While the 1807 Slave Trade Act outlawed the slave trade in the British Empire, this legislation did not impact on slavery itself, or concern the treatment of slaves. In addition, Pease contributed to the British India Society, which was concerned with ethical practices in India. The 1833 Slave Emancipation Act did not affect ‘the status of more than a million serfs in debt bondage there’2.

Eager to engage local women in social work, Elizabeth Pease formed the Darlington Ladies Anti-Slavery Society around 1836, publishing the ‘Address to the Women of Great Britain’ in March 1838 to urge women to organise female anti-slavery associations. Pease was also present at the 1840 World Anti-Slavery Convention, travelling to London and engaging in discussions with women and men from across the world who looked to British women as a beacon of hope in the emancipation of slaves for their own nations. Pease maintained these connections and remained active in the movement for the abolition of slavery through correspondence with international abolitionists such as American Maria Weston Chapman3. These letters with like-minded thinkers provides valuable insight into personal communications between women in the movement, not only locally but internationally, and we can see just how committed these women were, from small towns and cities across the country and around the world, to a unified goal of emancipation.

Unfortunately, Elizabeth Pease, like many women, does not have a memorial to her name locally in Darlington, while her cousin Joseph Pease, the first Quaker MP in Parliament from 1832, has a statue to his name on High Row. There have been campaigns for a memorial to Pease and other abolitionist women by an Edinburgh-based women’s history group (Pease moved to Edinburgh in her later life)4. While this so far has been unsuccessful, it brings attention the women that are arguably forgotten. Women’s history, and women’s valuable role in significant movements, tend to be omitted from more general histories. Therefore, the Blue Plaque memorial in Sunderland is an incredible recognition, paying tribute to the incredible work, connections and campaigning of local women, and particularly Quaker women. These women, like Pease, were devoted to their religious outlook and their whole conduct influenced their lifestyle greatly, successfully contributing to the extensive campaign for the abolition of slavery.