The Victoria Hall and Temperance Institute was a Gothic-style building, which until it was destroyed by German bombers in 1941 stood on Toward Road, facing Mowbray Park. It was established in the 1870s by the banker, Quaker minister, and philanthropist Edward Backhouse and used for social, political, and religious meetings and performances. 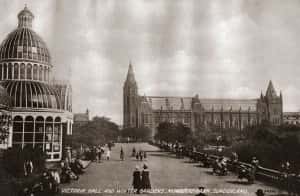 On a Saturday afternoon, 16 June 1883, 2,000 children attend a matinee variety show, performed by the Fays from Tynemouth Aquarium. Their advertisement promised ‘The Greatest Treat for Children Ever Given. Conjuring, Talking Waxworks, Living Marionettes, The Great Ghost Illusion , &c.’. When it was announced that presents would be given out on stage, children in the upper balcony rushed down the stairs but became caught on a door which opened inward onto the staircase and was bolted so only one child could get through at a time. In the resulting crush, 183 children aged between four and 14 died. This led to national safety legislation for entertainment venues, later being recognised as one of the first examples of Health and Safety legislation. The restored Victoria Hall Disaster Memorial stands in Mowbray Park as a memorial of the tragedy. 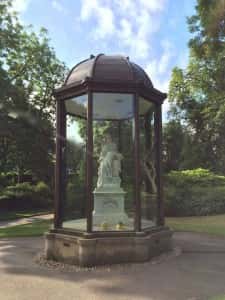 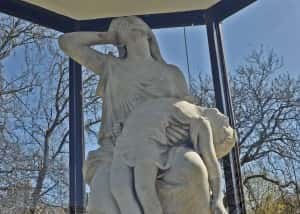 William Macgonagall, from Dundee, is often regarded as the worst poet in the history of the English language. He specialised in disaster poems and commemorated the tragedy soon afterwards in ‘The Sunderland Calamity’. You can read an edited version of the much longer poem here.

Victoria Hall continued to be used for concerts and other performances, right up to its destruction in 1941.  One such occasion was in 1910, when the Sunderland Philharmonic Society used this as the location of their Great Jubilee Concert to celebrate their 50th anniversary.  For that occasion, the singers were accompanied by the Hallé Orchestra, conducted by Sir Edward Elgar. The programme featured Elgar’s own compositions, including Nimrod, Enigma Variations, and Pomp and Circumstance Marches.

Rather more radically, the hall was also the venue for events organised by the Sunderland branch of the Women’s Social and Political Union (WSPU). On 9 February, 1912, the WSPU leader, Emmeline Pankhust, was guest speaker at such an event. Local newspapers reported the presence of anti-suffrage hecklers, and the police were called to remove two of these in the course of Mrs Pankhurst’s speech.