The local legend of the Lambton Worm is commemorated in various ways around the city.

A modern complex of hotel and leisure buildings stands on Green Terrace, which is part of the old Bishopwearmouth area of Sunderland around the Minster. The Lambton Worm pub stands close to the site of the Lambton Arms, a Victorian pub that was demolished in the 1960s. Both pubs carry the name of the Lambton family which had become immensely wealthy in the 18th and 19th centuries as mine owners. The legend of the Lambton Worm is one of the most famous in the north, and provides a link with the local landmark of Penshaw Monument in Herrington. Bryan Talbot’s Alice in Sunderland explores links between this legend and the development of Lewis Carroll’s poem The Jabberocky.

“The North East is a region disproportionately rich in dragon lore. Among others, the Legends of the Sockburn Worm and the Laidley Worm are based here.  Worm, from the Saxon wyrm or German wurm, is an old word for dragons.  As late as the 18th century, superstitious Mackem glass makers extinguished their furnaces every eight years to prevent the creation of a fire salamander.  Here, on the opposite bank to Penshaw, is the real site of the legend – the lair of the Lambton Worm … Worm Hill, in Fatfield, today a district of Sunderland.  No-one knows whether the hill is a Neolithic or Saxon burial mount, a Dark Ages fort or just a ‘kaim’ – a glacial deposit.  Nearby stands the chapel of Brigford, where the Lambtons [would] take their vows before departing for the crusades, and their ancient seat, Lambton Hall, both now gone for over two hundred years.

“And it is one of that family, related to the Liddels, who is the hero of the story ‘John Lambton that slew the worme was Knight of Rhodes…'” (Talbot, 2007: 115) 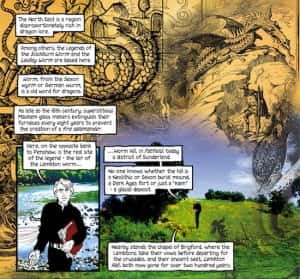 As Talbot has explained, the Lambton Worm legend has been the basis for many other legends and stories.  He lists some of these:

“Here the myth meshes with reality. John Lambton really does exist and is a Hospitaller Knight of Rhodes in the 15th century … and, for the following nine generations, the Lords of Lambton die violent deaths as prophesied by the witch’s curse, the last being Henry Lambton who dies in a coach crash in 1761. … while the dragon lives on in the popular imagination […] The legend inspires Stephen Laws’ The Wyrm, Ian Watson’s The Fire Worm, and Bram Stoker’s The Lair of the White Worm, adapted and filmed by Ken Russell as a Hammer Horror parody (in which a pastiche of the old ballad is sung).  Jeff Smith, American creator of the epic fantasy comic Bone, discovers the legend while visiting Sunderland and skilfully weaves it into his graphic novel Rose, drawn by Charles Vess … and Lewis Carroll, who grows up with the legend, and that of the Sockburn Worm, produces Jabberwocky – the nonsensical dragon slain by the ‘beamish boy’.”  (Talbot, 2007: 250) 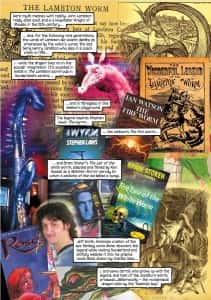 There is a striking statue of the Worm inside the Lambton Worm pub, and also a modern interpretation of this dragon in the children’s playground at Seaburn. The story of the Lambton Worm has been retold many times, such as Bram Stoker’s (1911) The Lair of the White Worm, and Thomas Pynchons’ (1997) Mason and Dixon, as well as Bryan Talbot’s (2007) Alice in Sunderland   The legend was set to music by C.M. Leumane in 1867, and is very much part of the oral tradition of the area.  The fact it is written in a Tyneside dialect rather than Wearside is usually explained by the fact the pantomine Leumane composed this for was performed in a Newcastle theatre. You can read the ballad here.   The song is written in ‘Geordie’ dialect. You can find out more about the North East’s regional dialects based on research by Sunderland academic, Dr Michael Pearce, here, and you can hear an annotated version of the song below:

Penshaw Hill mentioned in the ballad of the Lambton Worm is the site of Penshaw Monunent, or the Earl of Durham’s Monument, a folly that was built in 1844 in honour of John George Lambton (1792-1840), first Early of Durham, and first Governor of the Province of Canada. The Doric Hexastyle temple is a half-scale model of the Temple of Hepheastus in Athens. Its position 136 metres above sea level makes it a distinctive landmark and one which many Wearsiders regard as being a symbol of ‘home’.   The site was given to the National Trust in 1936 and, during the summer, visitors can climb the steps inside one of the columns to gain a panoramic view of the area from the top. 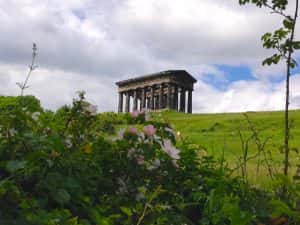