The Corporation of Sunderland decided that the Athenaeum was unable to house the collections of the museum, and built a larger library and museum in the Extension Park. The image below shows the museum in 1901, with the flag at half mast to mark the death of Queen Victoria. 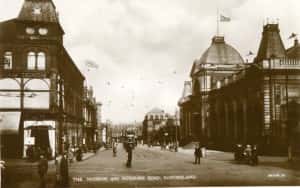 The United States President Ulysses S. Grant laid the foundations stone on 24 September 1877, during his tour of Britain. 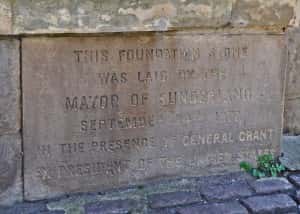 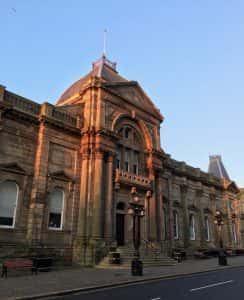 The front of the museum, today.

The deceptive lampposts are contemporary with the building of the museum. There are four: two on each side of the road.

The museum opened in November 1879. The library and natural history collections were on the ground floor, and the antiquities and art gallery on the first floor. The Winter Garden is the glass structure at the back of the building, which when opened featured exotic plants and birds, with goldfish in the pond. The original Winter Garden was based on Caxton’s design for Crystal Palace in London. This was destroyed in a bombing raid in 1941, the same raid that destroyed Victoria Hall. The Winter Garden design showcased the glassmaking heritage of Sunderland.  This had been established in 1696 when the Sunderland Company of Glassmakers opened their works in Bishopwearmouth Panns, just below the current railway bridge. James and John Hartley continued this tradition in the 19th century when they opened their Wear Glassworks just off Hylton Road.  There, they pioneered the manufacture of rolled plate glass, and supplied much of the glass used in the construction of Crystal Palace as well as the Winter Garden in Sunderland. 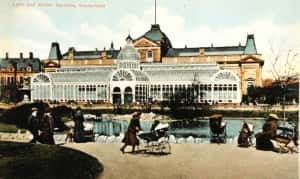 This image shows the original Winter Garden from the side of the pond. The old Gas Offices building on the corner of Fawcett Street is visible to the left.  Extensive bomb damage during the Second World War destroyed the original winter garden and much of the back of the museum.  It was gradually rebuilt.  The large extension at the back was built in the early 1960s.  The distinctive waved concrete canopy was constructed by council worker Fred Davis in 1963. 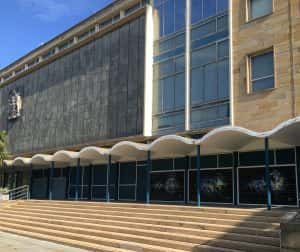 The colourful mosaics were designed by Sunderland Polytechnic lecturer William Hudspith, and represent the Arts: Literature, Art and Music.  Hudspith’s signature is engaged on steel tiles on each of of the three mosaic panels. 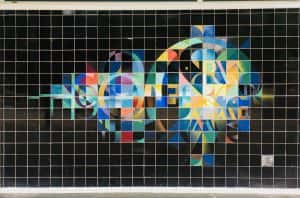 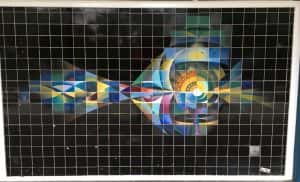 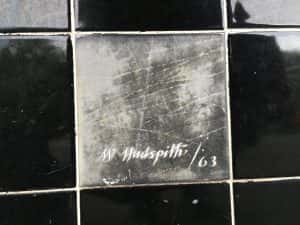 The new Winter Garden was opened in 2001. 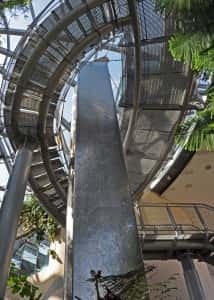 The museum contains a large collection of paintings by L.S. Lowry who, from 1960, made Sunderland his second home. In addition to this, there are rich holdings in local history, natural history, and a wide range of glass and pottery made on Wearside.  Clarkson Stanfield (1793-1867) is one of the best-known Sunderland-born artists.  He was born in Bodlewell House, High Street East, in 1793.  His father, James Field Stanfield, was a former sailor who had moved to Sunderland to join the Scarborogh-Sunderland Theatre Company.  Clarkson’s early career as a sailor in both the merchant navy and, after being press-ganged, in the Royal Navy, influenced his later artworks which often feature stormy seas, such as this one, which is on display in Sunderland Museum. 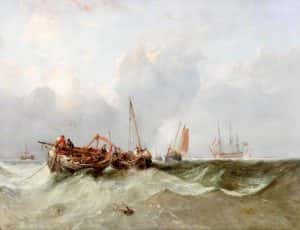 Stanfield, Clarkson Frederick; The ‘Chasse Maree’ off the Gull Stream Light, the Downs in the Distance.  Sunderland Museum TWCMS 35164.

Clarkson Stanfield began working in theatre set design after leaving the navy and developed a reputation for high quality scenery, and was employed by the Royalty Theatre, Wellclose Square, London from 1816.  From 1830 onwards, he focussed on easel painting and was widely regarded as being only second to JMW Turner in respect of his seascapes. He was a founder member and president of the Society of British Artists, and was elected to be a member of the Royal Academy in 1834.