There are many different resources available to help you with your wider reading and research. You’ll find some essential resources to explore for Law in the sections below.

If you want to find the best academic resources for research and evidence to inform your practice, this page is a great place to start. Use these resources alongside your recommended reading from your tutors to extend your research into new areas.

Books and eBooks in the Library collection not only reflect the titles on your My Module Resources lists but also offer titles for background and wider reading. The majority of the books you’ll need for Law can be found at St. Peter’s Library

All books and eBooks available at Sunderland are listed on the Library Catalogue.

What new books and eBooks has the library bought recently?

The library have purchased a number of books for law over the last year which you can view on our New Books List.

The Library subscribes to journals chosen by the Faculty that you can access in print and online.

The most effective way of searching is to use Library Search so that you can search across all available sources.

Start your search at the library web page. Enter your title or keywords into the library search box and choose the ‘Journal Articles’ button. You will be taken to Library Search where you can review and filter your results.

To access any of our online journals you need to be logged on with your University of Sunderland login details. This ensures that you are accessing the journal through our subscription. 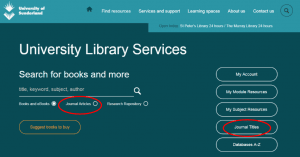 Alternatively if you know the title of the Journal you would like to search for select the ‘Journal Titles’ option from the library web page. It is easier to start at our website and follow a link from there to the journal or specific article but sometimes you will need to log in once you are on the publisher’s website.

Some quality academic research is published in free to access journals, known as Open Access journals. You can find many of these in your subject area from the Directory of Open Access Journals

You will need to use a variety of primary and secondary information sources when studying Law:

Law reports
Published volumes of the decisions of the courts. Law reports are available through online subscription databases such as LexisLibrary and Westlaw UK, which can be accessed through Discover A-to-Z.

Statutes (Acts of Parliament and Statutory Instruments)
Theses are also available through online databases such as LexisLibrary and Westlaw UK as well as sites such as Legislation.gov.uk.

Textbooks/monographs
Textbooks (teaching texts) and monographs (specialist works) are available in the Library. Some are available as e-books which you can read both on and off campus. Check the library catalogue for availability.

Bibliographic works and encyclopaedia
These are reference works which are useful for definitions. They include Halsbury’s Laws of England which is available both online through LexisLibrary and in print in the library.

This database allows you to search for the meaning of abbreviations for English language legal publications, from the British Isles, the Commonwealth and the United States, including those covering international and comparative law.

Use HeinOnline English Reports to access more than 100,000 of the most important early English cases that laid the foundation for the laws of nations under the British Empire and influenced the development of laws across many lands.

JustisOne is a multi-source legal search engine and citator. It is provider-neutral and links to content from a range of publishers and includes links to full-text resources in leading online legal resources including  BAILII, LexisLibrary, Westlaw, and more.

JustisOne: Getting started guides and videos:

Westlaw: User guides (log-in with your University details to access)

In addition to subscription legal databases such as LexisLibrary and Westlaw UK there are other useful resources which are freely available on the web:

This database allows you to search for the meaning of abbreviations for English language legal publications, from the British Isles, the Commonwealth and the United States, including those covering international and comparative law.

EUR-Lex provides free access, in the 24 official EU languages, to European Union law.  This database covers many types of texts produced mostly by the institutions of the European Union, but also by Member States, EFTA, etc.

Find out more about the ECHR, and access records of its decisions.

The FLAG database gives legal researchers details about holdings of foreign, international and comparative law in the UK’s academic, national and specialist law libraries – find out where to find foreign law in UK libraries.

Use this website for links to government services and information.

HM Courts & Tribunals Service is responsible for the administration of criminal, civil and family courts and tribunals in England and Wales. This website includes daily court lists and  information about Court and Tribunal fees.

The IPO is the official government body responsible for granting Intellectual Property (IP) rights in the United Kingdom.  Find information on all types of IP, including patents, trade marks, designs, and copyright.

The Law Society represents solicitors in England and Wales.  The Law Society helps, protects and promotes solicitors by negotiating with and lobbying the profession’s regulators, government and others; and offering training and advice.

This website is managed by The National Archives on behalf of HM Government and carries most types of UK Legislation. It includes UK Acts from 1267-present, Statutory Instruments, local acts, church measures.

The UK Parliament website includes links to Hansard, progress of current and draft bills before Parliament, parliamentary publications and archives.

All Public General Acts in full-text from 1988 onwards, and PDF where available for 1837-1987.  Explanatory notes are published alongside Acts since 1999.

Full-text of all Statutory Instruments since 1987.

Newspapers can be useful as both primary and secondary sources of information. As well as providing commentary on events, such as high profile legal cases,  newspaper articles can provide insight on how an event or incident was reported in the media.

Newsstream – Gives access to many contemporary news sources from around the world – find out more about on our blog.

Being able to accurately cite the source you have used in your work is an important academic skill.

There are various styles of citation but although these vary in style the same principle applies: you are giving the reader all the information they need in order to trace your source item.

You can find both the full OSCOLA guide, and the Quick Start Guide on the OSCOLA website.

Once you are familiar with the concepts and examples in the full guide, you will find the Quick Start guide a useful quick-reference document.

On the same website, you can also find useful FAQs about OSCOLA

Cite Them Right is a guide to help you get started with the principles of citing and referencing and contains an excellent overview of OSCOLA and referencing legal materials.

For further help and support in developing your referencing skills, see our Library & Study Skills guides or book a 1-2-1 with a Study Skills Advisor or for quick referencing queries, chat to us on Library Talk 24/7.

Box of Broadcasts (BoB) is an on-demand TV & Radio streaming service for education and research. It contains over 2 million broadcasts from over 65 free-to-air channels including BBC, ITV, Channel 4 and more.  You can find a complete list of channels here.

As well as giving stable, legal access to broadcast content, BoB offers some exciting features for teaching and learning.

You need to log in with your university ID and password, and then enter your email address and name (one time only) to create an account within BoB. It should work in all internet browsers, but Chrome seems to be working the best at the moment. Due to licensing restrictions, BoB can only be used in the United Kingdom.

Conference Alerts indexes many academic conferences. Browse by topic or by country.

Zetoc is a British Library service which indexes over 100,000 conference proceedings.

Some conference proceedings may be available on Google Scholar.

What new books and eBooks have the library recently bought?

PhD theses can be useful sources of unpublished information. University of Sunderland theses are added to the Sunderland Repository. You may find theses from other universities via EThOS or PQDT Open.

EThOS (e-theses online service) –  from the British Library
EThOS is the UK’s national thesis service with approximately 400,000 records relating to theses awarded by over 120 institutions. Around 160,000 of these also provide access to the full text.

PQDT Open
PQDT Open provides the full text of open access dissertations and theses free of charge where the author has opted to publish as open access. This includes international Universities