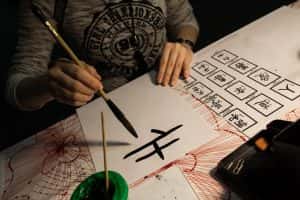 Discovering Sacred Texts, curated by the British Library, provides access to the richness and diversity of the texts from some of the world’s greatest faiths. Discover more about the sacred texts from Buddhism, Christianity, Hinduism, Islam, Judaism, Sikhism and the Baha’i Faith, Jainism and Zoroastrianism.

This resource features content on the six most-practiced faiths in the UK – Buddhism, Christianity, Hinduism, Islam, Judaism and Sikhism – as well as a number of other faiths, including the Baha’i Faith, Jainism and Zoroastrianism.

The site showcases over 270 digitised collection items, alongside articles written by academics, curators and faith leaders and film content. Explore the exceptional calligraphy and illustrations included in these texts.

If you are interested in calligraphy, check out Sunderland University Library’s special collection of calligraphy resources, donated by the International Research Centre for Calligraphy.

[Most of this text has been sourced from the British Library]