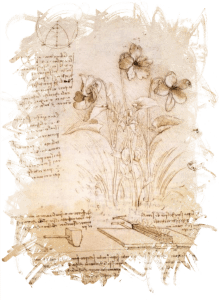 For the first time in the UK the British Library bring together selections from three of Leonardo da Vinci’s extraordinary notebooks to explore his fascination with motion, which he considered to be ‘the cause of all life’. The exhibition takes place at the British Library, London from Friday 7th June to Sunday 8th September 2019. Discounts are available for students.

Marking the 500th anniversary of his death, this unique exhibition showcases highlights from one of the British Library’s finest treasures, the Codex Arundel, alongside the Codex Forster from the V&A and a selection of sheets from the Codex Leicester, widely considered to be one of Leonardo’s most important scientific notebooks, which will be shown in this country for the first time since it was purchased by Bill Gates.

These remarkable pages, written in Leonardo’s distinctive mirror writing, illustrate how his detailed studies of natural phenomena – and in particular of water – influenced his work both as an artist and an inventor. With intricate drawings and diagrams crowding every page, marvel at Leonardo’s insights into subjects as varied as the formation of waves and air bubbles, river flow, the velocity of wind, and the nature of light and shadow.

Follow Leonardo in his tireless pursuit of knowledge and track his thoughts and experiments, which in an effort to understand the world around him foreshadowed modern scientific method. You’ll also have the chance to view some of Leonardo’s designs for devices including an underwater breathing apparatus and a perpetual motion wheel capable of producing and harnessing energy.

As your journey through Leonardo’s incredible enquiring mind concludes, studies for his famous painting, The Virgin of the Rocks, reveal how his observations of nature in motion directly informed his ability to portray human movement in the artistic masterpieces for which he is known today.

[Text sourced from the British Library]